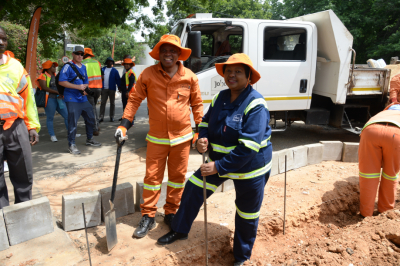 Following a period of protracted negotiations between the Johannesburg Roads Agency (JRA) and the Gauteng Department of Roads and Transport (GPDRT), the city has agreed to end the working relationship that has seen the city’s road agency design, install, repair and maintain traffic signals on behalf of the provincial department.

"We could not reach an agreement to renew a service level agreement that would have seen the agency continue to actively maintain and repair 231 signalised intersections on provincial roads across the City of Johannesburg," said city councillor Funzi Ngobeni.

"A service level agreement was entered into between the JRA and the provincial department, with effect from 1 September 2017 but this agreement expired in August 2020.

"Since then, numerous attempts have been made to renew the SLA but these have been unsuccessful. At a meeting held between myself and MEC Jacob Mamabolo in March, the MEC indicated that the reason for not renewing the JRA service level agreement was due to the entity not having its tax affairs in order.

"Despite ongoing negotiations, the JRA continued to repair and maintain the province’s traffic signals out of concern for motorists frustrated by continuous traffic jams on key intersections across the City, especially during peak hours, said Ngobeni.

"It is important to note that JRA simply could not leave these intersections unmaintained while motorists, who are none the wiser about whether these were the responsibility of JRA or the provincial government, continued to experience daily frustrations.

However, with the failure to come to an agreement on a new SLA, we came to a decision to terminate the working relationship between JRA and the provincial department."

Ngobeni added that a process is underway to hand over to the Gauteng Department of Roads and Transport. A total number of 231 maintained intersections will be handed over as per the asset registry.

The handover is taking place as follows:

Meanwhile a forensic report, revealed an irregular expenditure of more than R400-million with officials allegedly grossly overcharging for certain projects but these officials are yet to be held to account.

The JRA board has told eNCA, the City’s forensic and investigation service has been tasked with speeding up the conclusion of all audit reports.

More in this category: « Heads of Mission tasked with leading drive to promote SA abroad. UN suspends Russia from human rights body over Ukraine abuses. »
back to top