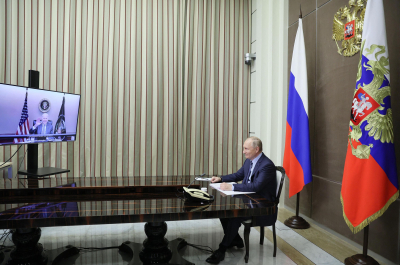 The U.N. General Assembly has voted to suspend Russia from the U.N.'s leading human rights body over allegations of horrific rights violations by Russian soldiers in Ukraine, which the United States and Ukraine have called tantamount to war crimes.

Russia is the second country to have its membership rights stripped at the Human Rights Council, which was established in 2006. In 2011, the assembly suspended Libya when upheaval in the North African country brought down longtime leader Moammar Gadhafi.

The vote on Thursday was 93-24 with 58 abstentions. That is significantly lower than votes on two resolutions the assembly adopted last month demanding an immediate cease-fire in Ukraine, withdrawal of all Russian troops and protection for civilians. Both resolutions were approved by at least 140 nations.

U.S. Ambassador Linda Thomas-Greenfield launched the campaign to suspend Russia from its seat on the 47-member Human Rights Council in the wake of videos and photos of streets in the Ukrainian town of Bucha strewn with corpses of what appeared to be civilians after Russian soldiers retreated. The deaths have sparked global revulsion and calls for tougher sanctions on Russia, which has denied its troops were responsible.

The vote makes Moscow the first permanent member of the UN Security Council to ever have its membership revoked from any United Nations body.

"War criminals have no place in UN bodies aimed at protecting human rights. Grateful to all member states which supported the relevant UNGA resolution and chose the right side of history," Ukrainian Foreign Minister Dmytro Kuleba said on Twitter.

Russia’s rights of membership in the UN Human Rights Council has just been suspended. War criminals have no place in UN bodies aimed at protecting human rights. Grateful to all member states which supported the relevant UNGA resolution and chose the right side of history.

Before the vote, the country's UN ambassador, Sergiy Kyslytsya, had urged UNGA members to "press the 'yes' button and to save the Human Rights Council and many lives around the world and in Ukraine".

"On the other hand, pressing 'no' means pulling a trigger and means a red dot on the screen – red as the blood of the innocent lives lost," Kyslytsya said during a special session on Ukraine.

Russia had called on an unspecified number of countries to vote "no", saying an abstention or not voting would be considered an unfriendly act and would affect bilateral relations.

In its so-called "non-paper" obtained by The Associated Press news agency, Russia said the attempt to expel it from the Human Rights Council is a political act by countries that want to preserve their dominant position and control over the world.

Those nations want to continue "the politics of neo-colonialism of human rights" in international relations, it said, adding that Russia's priority is to promote and defend human rights, including multilaterally in the Human Rights Council.

That was echoed by Gennady Kuzmin, Russia's deputy ambassador to the UN, who told the UNGA session before Thursday's vote that the resolution "has nothing to do with the human rights situation on the ground".

More in this category: « JRA ends traffic signal maintenance and repair partnership with GPDRT. ANC regional conference in the Eastern Cape won't go ahead as planned. »
back to top