Mpumalanga to host the celebrations of the 2022 Freedom Day. 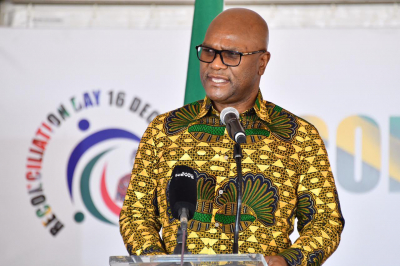 Minister of Sport, Arts and Culture Nathi Mthethwa has called on the nation to use Freedom Month to reflect on the country's democratic gains as the dignity of millions of South Africans has and is continually being restored.

Addressing the launch of Freedom Month on Friday in Pretoria, the Minister said this year’s commemoration will be used to pause and take stock of the constitutional democratic project.

"Inherent, therefore in Freedom Month 2022's theme is our conviction that besides the many challenges that have threatened to stymie this important constitutional democratic project, there are gains that we ought to safeguard, "Mthethwa said.

This year's Freedom Month, marked every year in the month of April, will be celebrated under the theme: "Consolidating Our Democratic Gains", as 2022 marks 28 years since the dawn of democracy in 1994, and fast approaching the three decade milestone of the country's constitutional democracy.

"One of the enduring sins of apartheid was the neglect of black communities even in terms of the provision of basic services, which impugned on their human dignity.

"It therefore stands to reason that the provision of basic services such as electricity, clean running water as well as provision of other basic infrastructure to previously disadvantaged communities was at the very core of the first development blueprint i.e. the Reconstruction and Development Plan (RDP).

"In giving meaning to freedom, successive democratic administrations since 1994 have had to intensify efforts in making sure that the most basic of services are delivered to the people," the Minister said.

The 2019 Baseline Survey of the Foundation for Human Rights is one of the most reliable pieces of empirical data that offers a glimpse of South Africa’s progress since 1994 into some of these most basic of human needs.

In terms of housing, there is already an 82% of the adult population living in formal housing, although increased migration from the rural hinterlands into the major urban centres threaten to derail some of the gains in this regard.

In addition, increased immigration into South Africa by persons who boast no special or scarce skill, and who are principally economic migrants, has also put further strain on the housing statistics.

"Sanitation, water and electricity are important sets of indicators in tracking the nation’s progress since the dawn of democracy in 1994. According to the 2019 Baseline Survey of the Foundation for Human Rights, progress has been impressive in this regard, considering the fact that clean running water and electricity were a novelty for many communities during apartheid.

"Only 10% of adults reported to have access to water outside of their yards or their places of dwelling. With regards to electricity, an overwhelming majority of 92% had access to electricity. A resounding success compared to the estimate of only 53.6% in the October Household Survey of 1994," he said.

The Presidential Youth Employment Intervention has enabled young people to have access to opportunities.

Through the National Student Financial Aid Scheme, government has made it possible for a vast majority of the black poor youth to access higher education, which remains one of the foremost channels to break the cycle of generational poverty.

"Of course, as we learned our lessons from the Fees-Must-Fall phenomenon, not every deserving student has had the necessary financial assistance they require – but government has since been exploring other more efficient avenues for assistance in closing this gap.

"For our part, transformation of the heritage landscape, which had largely remained white, has been key. This is our own way as a sector in bringing meaning to freedom. In ensuring that the many unearthed and untold stories are given the platform through the national oral history project that we support," the Minister said.

Through the geographical names project, government has also deliberately set the country on a path towards healing by changing names of towns and cities, which have unsavoury colonial and apartheid connotations.

"In doing so, we have always sought to consult widely in ensuring that the affected communities are part of the name-change process. Despite occasional litigation by disgruntled parties, this process has had resounding success and it thus remain work-in-progress.

"Symbolism is extremely important. It is also through symbolism that people feel part of a community and the broader society and geographical name change is one of those potent assistive we have available as a Department in effecting the desired social change," the Minister said.

As part of Freedom Month, government has consolidated programme of activations, which involve most of government as well as state entities.

They will be shared with members of the media in due course.

"I am also pleased to announce that Mpumalanga is our official hosts for the celebration of the 2022 Freedom Day, and Middelburg in the eNkangala District is the chosen venue, "the Minister said.

More in this category: « Kenya Airways, SAA plan investor hunt for Pan-African carrier. Government's stance at UN doesn't mean it condone the conflict in Ukraine | Pandor. »
back to top