25 Immigration officials to be deployed in Diepsloot. 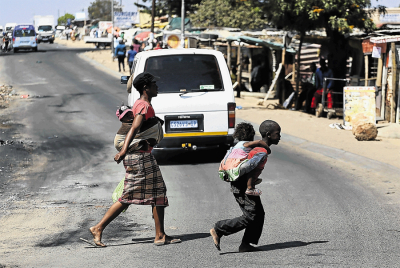 The immigration officials will be on the ground for the next three months as part of government's effort to solve the issue of undocumented foreign nationals living in the area.

Motsoaledi made the announcement during his visit to the township on Friday.

"We at Home Affairs have brought 25 immigration officers, we will leave them for three months so that they may deal with issues of immigration accordance with South African law," said Motsoaledi.

Tensions in Diepsloot boiled over this week amid anti-crime protests by residents and have accused police of failing to adequately deal with violent crime in the township.

The violence also led to the death of Zimbabwean national Elvis Nyathi, who was stoned and burned to death by a mob looking for foreign nationals in the early hours of Wednesday morning.

Nyathi's death increased the tension between South Africans and foreign nationals in the area, with fears of possible xenophobic attacks.

The commission visited Diepsloot on Thursday and Friday amid this week’s violence and protests in the area.

Acting provincial manager for the Human Rights Commission in Gauteng, Zamantungwa Mbeki, says the community felt their complaints to authorities about crime in the area were falling on deaf ears.

We had engagements with the community regarding that. What we heard from the people we spoke about is that there had been seven people who were killed in a space of a couple of weeks in Diepsloot. The community believed that the person who had conducted these murders was a person of Zimbabwean origin.

"Because of that and the lack of police intervention then caused this flare up and shutdown. The way that this was put is the police’s ability to respond to community needs. The community raise their concerns saying they are fearful that the murders are taking place in our community and there is a lack of intervention from the police i.e. we don't see investigations taking place we are not seeing people getting arrested.

"But those who are arrested come out after a few days. That is going to cause distrust and tension in the community. That then flares up an additional issue of xenophobic attacks and that people feel that the crime is being caused by a particular group of people. At the centre of this is how police adequately intervene when there are incidents of crime in the community."

Since Nyathi's death, police have increased their visibility on their ground by adding more forces in an attempt to quell the tension in Diepsloot.

According to national police spokesperson, Colonel Athlenda Mathe, 54 people had so far been arrested in Diepsloot since Cele deployed additional police officers to the area.

"On Wednesday, about 26 people were arrested, and last night we had 28.

"Two of which were domestic violence charges, one drunk driving, and the rest are foreign nationals without proper documentation.

"As the South African Police Service, we will not tolerate lawlessness and violence as an act of intimidation, and we implore the community to raise concerns responsibly," said Mathe.