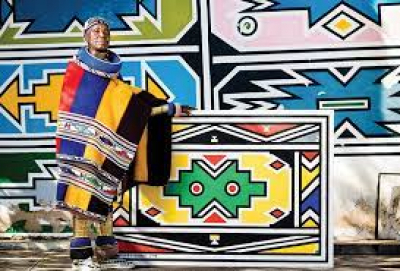 Police in Mpumalanga says a suspect linked to the attack and robbery on world-renowned Ndebele artist Esther Mahlangu has been granted bail of R3 000.

The 87-year-old was robbed at her home near Siyabuswa on 19 March.

Two suspects appeared in the Mdutjana Magistrate's Court in Mpumalanga on Friday following their earlier arrest.

Spokesperson for Mpumalanga police Selvy Mohlala says one suspect was remanded in custody while the other has been released on bail.

"Twenty-seven-year-old Simon Kgantshi Skosana has been remanded in custody until 20 April for a formal bail application, while suspect number two Jan Mlemani Kwati Masilela, aged 32, has been released on R3000 bail and will be back in court on 10 May."

During the robbery, the pensioner was assaulted and strangled with her hands tied with a cord.

"The suspect then searched her bedroom and took a safe containing a pistol as well as an undisclosed amount of cash and bundles of keys then fled the scene," says Mohlala.

Mahlangu's firearm has been retrieved, according to Mpumalanga premier Refilwe Mtshweni-Tsipane.

While addressing the media outside the artist’s home on Thursday, Mtshweni-Tsipane revealed that police initially took seven suspects in for questioning.

"We have apprehended two [suspects] for now. Up to this far, there's about seven people who know how [the robbery] transpired in this case.

"But out of this seven, two of them were actively involved so the others are witnesses to that effect. They were not necessarily active participants in the process, but they are the ones that also led us to where we are today, "the premier said.

Mtshweni-Tsipane also indicated there may be security upgrades to Mahlangu’s house following the incident.

"An assessment is about to be concluded and upon conclusion of that report it will then come to us so that we look at it and we put budget in accordance with the recommendation. Yes, it is work that is still underway," she said.

The premier further said that there was security already guarding the area.

"That is happening and the family also confirmed and were very happy about that whilst we still wait for the finalisation of the report," Mtshweni-Tsipane added.

More in this category: « 25 Immigration officials to be deployed in Diepsloot. Phathiswa Magopeni's allegations against Board Chair unsubstantiated| SABC. »
back to top