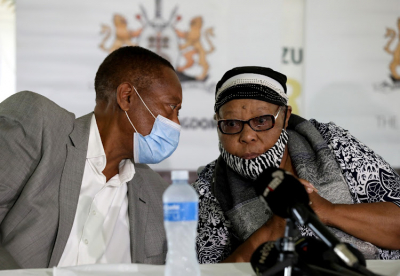 Prince Mbonisi Zulu and Princess Thembi Zulu during a media briefing about the end of the mourning period for King Goodwill Zwelithini at KwaKhethomthandayo Royal Palace on June 19 2021. Photo Credit: Sandile Ndlovu.

Princess Thembi Zulu-Ndlovu, who was the sister of the late King Goodwill Zwelithini, has died, the royal family confirmed on Friday.

Princess Thembi passed away at a Newcastle hospital.

"Yes she is no more. She died this morning. She was admitted in hospital today and died today," family spokesperson Prince Mbonisi Zulu said.

Princess Thembi was one of the family members opposed to the installation of Prince Misuzulu as king.

Zulu said he would be travelling from Nongoma to Newcastle where the princess took her last breath.

For the past couple of years, Zulu-Ndlovu had been bound to a wheelchair.

Her last public appearance was last weekend in Newcastle where she attended the umembeso ceremony for King Misuzulu kaZwelithini’s bride, Ntokozo Mayisela.

It is understood the royal family will issue a statement soon on Zulu-Ndlovu’s death.

More in this category: « E.tv heads to constitutional court in fight over analogue signal switch-off. Didiza pleads with public to report brown locust sightings. »
back to top