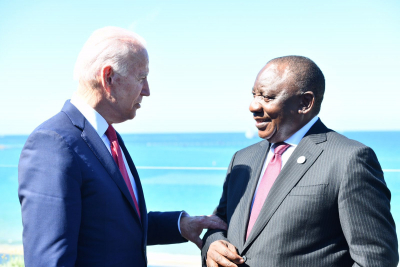 US President Joe Biden called President Cyril Ramaphosa on Friday after South Africa abstained from voting in the United Nations General Assembly on the resolution to suspend Russia from the Human Rights Council.

The vote involved over what the UN said is gross and systematic violations and abuses of human rights.

The US-led resolution received 93 votes in favour and 24 against, and 58 countries abstained.

South Africa abstained from voting in a UN resolution on the war in Ukraine for the third time on Thursday, saying it believed the tabling of the resolution was premature and "prejudged the outcomes" of the independent, international commission of inquiry.

The commission's mandate is to investigate all alleged violations and abuses of human rights, and violations of international humanitarian law and related crimes.

South Africa has been criticised for its stance on Russia's war in Ukraine, which has so far claimed at least 1 500 lives, and forced more than 4.3 million to flee their homes to neighbouring countries.

On Friday, scores of people including children were killed after two rockets hit a railway station in Kramatorsk in the Donetsk region as thousands tried to evacuate the area.

South Africa has repeatedly called for Russia and Ukraine to maintain the momentum of peace talks and resolve disputes through dialogue and negotiations, which has placed government under fire for its neutral stance, after failing to condemn the war.

Ramaphosa is also yet to speak to his Ukrainian counterpart Volodymyr Zelensky, after already having spoken to Russian President Vladimir Putin.

On Friday evening Ramaphosa took to Twitter to confirm that he and Biden had a "productive call earlier this evening" to discuss a wide range of issues.

I had a productive call with US President @JoeBiden earlier this evening. As part of deepening relations, we agreed to set up a team to strengthen trade, increase investment in infrastructure and work to tackle climate change. pic.twitter.com/NTris3xHfr

"We shared views on the conflict in Ukraine and agreed on the need for a ceasefire and dialogue between Ukraine and Russia."

"As part of deepening relations, we agreed to set up a team to strengthen trade, increase investment in infrastructure and work to tackle climate change."

"We discussed the need to support growth and development on the African continent. We shared views on the conflict in Ukraine and agreed on the need for a ceasefire and dialogue between Ukraine and Russia," tweeted Ramaphosa.

In a statement the White House said Biden and Ramaphosa discussed the impact of the Ukraine crisis on commodity prices, supply chains and food security in Africa.

Biden is one of several world leaders that Ramaphosa has spoken with since the war broke out in Ukraine in February.

Ramaphosa also congratulated Biden on the confirmation of Judge Ketanji Jackson Brown as the first black woman Justice of the US Supreme Court.

Meanwhile at least 52 people are killed, including five children, in a rocket attack on a train station in the eastern Ukrainian city of Kramatorsk that is being used for civilian evacuations, according to Donetsk region governor Pavlo Kyrylenko.

Ukrainian President Volodymyr Zelensky describes Russia as an "evil with no limits" after the attack and calls for a "firm global response".

More in this category: « Former MPs downgraded from business class travel to economy. Livestream: Presidential Imbizo with President Cyril Ramaphosa. »
back to top