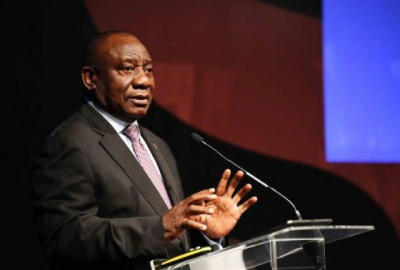 President Cyril Ramaphosa is leading government's engagement with communities during a District Development Model Presidential Imbizo at the Mangaung Metropolitan Municipality in the Free State.

The visit to the Free State is the second post-State of the Nation Address (SONA) Presidential Imbizo where engagement with citizens is themed on the President’s SONA call to action,"Leave No One Behind".

Shortly before the commencement of the President's visit, GCIS conducted a snap survey in the area to get the views of the locals about the much-anticipated Presidential Imbizo.

Boitumelo Rampeti, a local resident in Mangaung, said she is keen to hear more about plans aimed at reducing unemployment.

"If given a chance, I would ask the President to give priority to young people with regard to job and business opportunities. There is high youth unemployment in this area."

Rampeti believes if government prioritises youth for work opportunities, there will be less crime in the area.

"Most young people have resorted to substance abuse, which leads them to commit crime to sustain their criminal lifestyle," she said.

Echoing the same sentiments, Chris Mabaleng said he would ask the President to consider young people when it comes to business opportunities, as this will reduce the high number of youth unemployment in the area.

"Young people are capable of doing anything if given a chance,” Mabaleng said, adding that many unemployed young people have qualifications or tertiary education.

Mother of two, Bridgett Kgetsi, appealed to the President to crack the whip on municipal officials to improve service delivery.

"Service delivery in this area is very poor. Our roads are in a bad state. In some instances, it takes days for garbage to be collected and in some instances, blocked sewage [is unattended for] days."

An elderly Ntate Amos Moagi said he would ask the President to increase the older persons grant, as some of the elderly have a lot of responsibilities.

"We too have financial commitments, just like anybody else. Government must consider increasing our grants," he said.

Cabinet this week approved an intervention by the national executive in the governance of Mangaung Metro, in terms of Section 139(7) of the Constitution.

More in this category: « Ramaphosa and Biden discuss Ukraine, Trade and Climate change. SAWS warns of heavy rains in most of the provinces this weekend. »
back to top