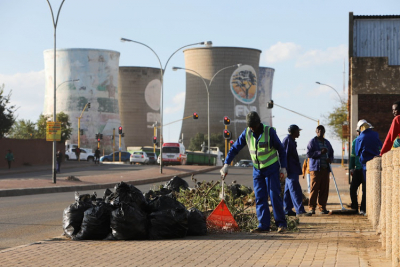 President Cyril Ramaphosa is today engaging with communities in the Free State on the District Development Model (DDM) and how this will be implemented to improve their quality of life.

The visit to the province is the second post-State of the Nation Address (SONA) Presidential Imbizo, where engagement with citizens is themed on the President’s SONA call to action -- Leave No One Behind.

The president has promised to turn things around in the country, including fighting crime, corruption and other social ills.

Ramaphosa, who was addressing people at a presidential imbizo in Mangaung, Free State, said despite many challenges facing the country they were going to address them.

This came after dozens of members of the community from different parts of the Free State listed complaints to Ramaphosa and his ministers.

The community complained about crime, unemployment and the lack of service delivery.

He said he heard complaints about lack of service delivery.

"Our meeting today will lead to a number of changes, as you have heard. We are continuing to work to correct the many things that have gone wrong in our country, including things like corruption, criminality, state capture and all those issues. We will get this country right. I call on you as our communities to work with us because as we work together we will be able to turn things around," said Ramaphosa.

The government will also address issues of crime, sewage spillages, water supply and cleaning up the towns.

They also want to ensure there was proper infrastructure, he said.

With the Easter Weekend a few days away, the President urged residents to remain vigilant against COVID-19.

Ramaphosa said: "With the end of the national state of disaster earlier this week, the country is one step closer to living and working without too many restrictions.

"If we want to make sure that the COVID-19 virus does not hold back our country’s recovery, it is important that as many South Africans as possible get vaccinated.

"This means that we all need to take responsibility for keeping ourselves and each other safe.

Meanwhile Cooperative Governance and Traditional Affairs Minister Nkosazana Dlamini Zuma has reiterated that they will take over the running of the Mangaung metro.

This comes after the Cabinet’s decision this week where it announced the national government will take over Mangaung and Enoch Mgijima municipalities.

The Enoch Mgijima municipality in the Eastern Cape is where a stadium that cost R15 million was built and raised questions because of poor quality and high cost.

Dlamini Zuma, who was addressing the presidential imbizo in Mangaung on Saturday, said the Mangaung municipality was in a mess.

She told the community that the national government has invoked its constitutional powers to take over a dysfunctional municipality under its control.

The issue of dysfunctional municipalities has been raised by the auditor-general over the years.

Cabinet said this week it was invoking section 139 of the Constitution to take over the two municipalities because they were facing serious financial and service delivery challenges.

The presidential Imbizo serve as an opportunity for the President to engage the public on the implementation of the government's Programme of Action to help improve the lives of people.

"It also allow Ramaphosa to view first-hand key achievements attained by the Free State government in Government’s Programme of Action, particularly those highlighted during this year's State of the Province the Address."

The Presidency will in due course announce details of the third Presidential Imbizo which will be held in Mpumalanga towards the end of April.

More in this category: « RTMC resume intake for the trainee traffic officer program. Zikalala deliver a hard-hitting speech & takes a swipe at RET faction. »
back to top