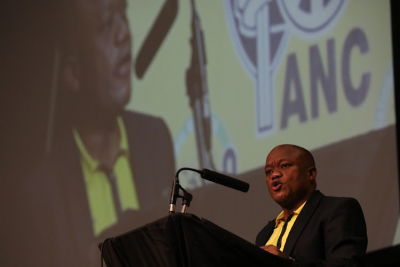 The ANC eThekwini regional conference got off hours later on Saturday as the party tried to work out who from the regional ANCYL and the ANCWL should have the voting status.

Provincial party spokesman Nhlakanipho Ntombela said it was eventually decided that three representatives each from the ANCYL at national, provincial and the region discuss and agree on the delegation to represent the youth league at the conference.

"Collectively, we are doubling our efforts to deal with any perception of factionalised registration processes and activities associated with cleaning up of credentials.

"We are fully aware that any floppiness and mistake has a potential of dividing the organization during the most important period in our history," Ntombela said.

Opening the ANC's eThekwini regional conference in Durban on Saturday, ANC KwaZulu-Natal chairperson Sihle Zikalala condemned the notion that an ANC policy of radical economic transformation (RET) was factionalised in the party.

Zikalala delivered a hard-hitting speech emphasising the role of ANC branches in the communities they serve.

"Programmes of the organisation are not programmes of factions. There are those who were in government before, they did less to implement RET, but today they call themselves a group of RET. They are factionalising programmes of the ANC but have been nowhere in implementing RET."

He called out former party leaders who did not implement transformation during their terms in office.

"You cannot be deployed by the same movement to advance its policies then you keep quiet, and you do not implement policies. Then when you are out, you say no; you stand for transformation. You should have implemented transformation."

Zikalala said RET should not divide the organisation but was meant to deal with the racialised ownership of the economy.

He said radical economic transformation should not divide the party.

Zikalala reminded close to 400 delegates here of their responsibilities at this conference which he says is beyond just electing new leaders.

"I hear people signing about preferred comrades they think must be elected, but the fundamental task of the conference is to access the policies of the movement."

The ANC's largest region in the country will later elect new leaders with delegates having to choose between Zandile Gumede and Thabani Nyawose.

While Nyawose arrived to loud cheers and songs Gumede is absent from the event since having stepped aside from party activities due to the corruption charges she's currently facing.

ANC national executive committee members David Masondo and Lindiwe Sisulu are also present with Masondo having first arrived at this venue at 9 this morning delegates were in an open session.