SACP remembers Chris Hani on 29th anniversary of his assassination. 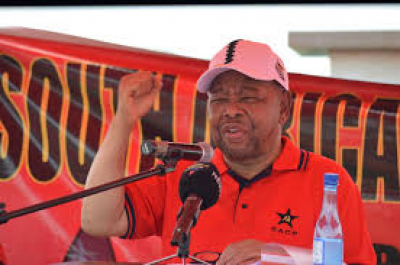 Today marks 29-years since death of SACP General-Secretary Chris Hani was murdered by Polish immigrant Janus Walus on 10 April 1993 outside his home in Dawn park in Boksburg.

Walus and Clive Derby-Lewis were sentenced to life imprisonment for Hani's murder.

South African Communist Party (SACP) leader Blade Nzimande is delivering a keynote address at the 29th Annual commemoration of the death of Hani. The event will be held at the Thomas Nkobi Memorial park in Boksburg east of Johannesburg.

"Today we remember Chris Hani, who was assassinated on this day 29 years ago.

"Now is the time to intensify the struggle for the free, just and equal society to which he dedicated his life and for which he died."

"Now is the time to rebuild the ANC as a movement of selfless cadres solely committed to the freedom of the South African people from want and hunger."

In a statement, the SACP said after 29 years, there had still been no full disclosure of the truth about Hani's death.

"Consequently, there has been no closure for the Hani family, the SACP and all democratic motive forces that waged the struggle for democracy and social emancipation in South Africa, who want full disclosure of the truth and the circumstances surrounding the assassination.

"Thus, justice has not taken its course."

Waluś has applied for parole on many occasions with no success.

Earlier this year, Hani’s widow Limpho urged the Constitutional Court to throw out the bold bid for freedom Walus had launched.