Zandile Gumede's win seen as a blow to Ramaphosa and ANC renewal. 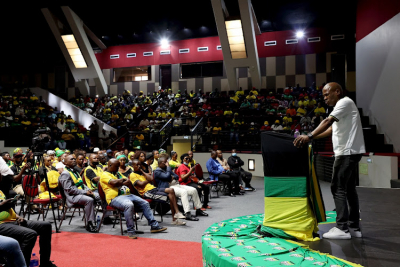 African National Congress elected a former mayor who has been charged with corruption to a top post in one of its key regions, dealing a blow to president Cyril Ramaphosa's efforts to clean up the party.

The ANC in the eastern eThekwini municipality, which has more branches than any other urban center, on Sunday chose Zandile Gumede as its chairwoman. She won 210 votes while Ramaphosa ally Thabani Nyawose, the municipality's speaker, secured 181.

The president has made the fight against corruption, which became endemic during his predecessor Jacob Zuma’s nine-year rule, a top priority since he won the control of the ANC in 2017. The party has adopted a rule stating that officials facing criminal charges must step aside from their posts but that doesn’t preclude them from seeking election.

Gumede, who is a close ally of Zuma, and 20 co-accused face charges of fraud, corruption and racketeering relating to a waste disposal contract in the port city of Durban. She stood for the eThekwini post in absentia, meaning it may remain vacant until her trial — set to resume in July – is concluded.

Following her win, she conceded that while she may not be objective about the party's step-aside policy because it affected her, she would like to see the rule being repealed.

"I think the ANC must rethink it. It's painful," she said.

Gumede said the charges against her were unclear and she hoped for the speedy resolution of her case.

"The case must be over so I can go back to helping our communities," she said shortly after her win.

Ramaphosa is widely expected to seek another five-year term as ANC leader in December. While Gumede’s appointment is a setback to his campaign, he is still currently the frontrunner to win.

His possible challengers include Tourism Minister Lindiwe Sisulu and Zweli Mkhize, who quit as health minister last year after being implicated in a tender scandal.

Under ANC rules, its leader will be its presidential candidate in 2024 elections.

Investors would probably welcome an extended tenure for Ramaphosa, who has sought to clamp down on graft and is making headway in attracting investment even as he struggles to ignite economic growth and tackle record unemployment.

More in this category: « Ramaphosa condemns attacks on foreigners as anti-immigrant sentiment flares up. Watch Live: Zuma, Thales in dock as arms deal trial gets underway. »
back to top