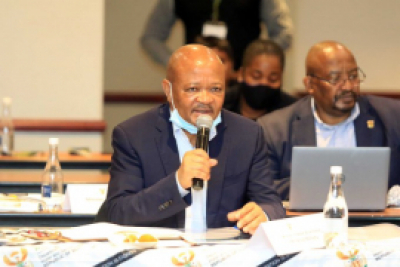 Water and Sanitation Minister, Senzo Mchunu, says there is no chance that any activity associated with the department currently and in future, concerning fraud and corruption and will go unpunished.

"Both [the] ministry and the department have a zero-tolerance policy towards fraud and corruption and will pursue disciplinary action and ensure consequence management in all cases where there is evidence of fraud and corruption, without fear or favour," Mchunu said.

Mchunu's remarks follow an article in the Daily Maverick, accusing the ministry and the department of blatantly disregarding reports by the former Minister's Disciplinary Advisory Committee.

The article, which is based on reports from a whistle-blower, also implied that the Ministry and the department are failing to ensure consequence management in respect of fraud and corruption cases by both senior and junior departmental officials.

Mchunu has disputed the report, noting that it is not only "an outright lie but a complete twist of information."

"Instead of being frustrated as alleged in the article, the whistle-blower is strongly advised to either hand over the files to him, approach the Special Investigating Unit (SIU) who are already investigating a number of corruption cases within the department, report the crimes that they have information on, or to approach the police to open cases. Failure to report a crime or expose criminality is a crime in itself," Mchunu said in a statement on Monday.

Responding to the reports in question, Mchunu said the reports were compiled by the Disciplinary Advisory Committee formed during the previous Human Settlements, Water and Sanitation Minister's tenure under Lindiwe Sisulu. This was to advise the then Minister and acting Director-General on disciplinary actions required, pertaining to all wrongdoings.

"These appointments were therefore linked to the term of office of the former Minister, which came to an end on 05 August 2021. A formal statement was issued on 20 September 2021, addressing the alleged disbandment of the various Ministerial committees," Mchunu highlighted.

According to the Minister, the reporter submitted a set of questions, requesting him and the Director-General, Dr Sean Phillips to respond.

The Director-General responded in writing, whilst the Minister requested a virtual meeting with the reporter and the interview was held last week.

The Minister said the journalist misrepresented what he said by alleging that no formal hand-over ever took place between the former Minister and him.

During the interview, the Mchunu further explained that the alleged forensic reports were never handed over to him.

He added that various matters are at various stages of investigation by the SIU, ranging from the Giyani Pipeline Project to the War-On-Leaks Programme.

The reporter was alerted to another investigation where five disciplinary referrals had been made and 45 administrative action applications had been made for placing the implicated entities and individuals on the National Treasury database of restricted suppliers.

"I want to state publicly that there is no chance that any activity associated with the department currently and in future concerning corruption and fraud will go unpunished or be overlooked.

"We are really hard at work, focused on ensuring that all the citizens of the Republic of South Africa are given access to clean water and sanitation services, and we will not be deterred by such articles," the Minister said

More in this category: « South Africa will face a fifth Covid-19 wave in coming weeks |BER. Joburg municipality plans to adopt a new model to help city power cut costs. »
back to top