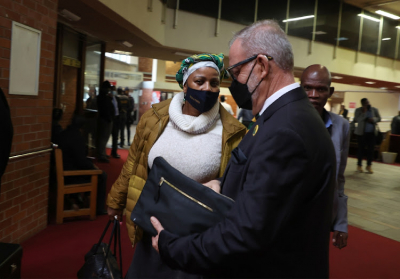 Former SAA board chair Dudu Myeni, has been criticised on Monday after she attempted to assault a photographer Sandile Ndlovu at the former president’s corruption trial.

Ndlovu attended proceedings at the Pietermaritzburg High Court on April 11, where the corruption trial of former president Jacob Zuma was due to begin.

He spotted Myeni, a close confidante of Zuma, in conversation with another of his supporters, Carl Niehaus, and photographed them together.

However, despite being in a public place, inside the high court building near the entrance, Myeni took exception to Ndlovu's performance of his duties and manhandled him.

Ndlovu said after Myeni, Niehaus and Zuma's daughter Duduzile Zuma-Sambudla emerged from the waiting room inside the court building, he moved towards them to photograph them. The group tried to avoid being photographed but he followed Myeni, who tried to hide her face behind Niehaus.

"When I entered court, she again confronted me, asking: 'Sandile, why are you taking my photograph? You don't do this to whites, but you are doing this to a black woman' I tried to engage her, but she told me not to give her an answer and literally told me to shut up."

The Sunday Times, and its online sister publication TimesLIVE, have condemned the alleged assault of its photographer.

Dudu Myeni tried to slap the camera of photo journalist Sandile Ndlovu out of his hands. This video was taken just after the incident. #ZumaCourtCase pic.twitter.com/ihoa6YNsJI

"The media is entitled to report on events in court buildings, to photograph individuals and their supporters outside court, and to cover proceedings inside the court room with the permission of the presiding officer," it added.

The publication called on Justice Minister Ronald Lamola and Chief Justice Raymond Zondo to ensure courts were places where journalists were able to work unimpeded, so as to inform readers, viewers, and listeners about cases being heard and the events around them.