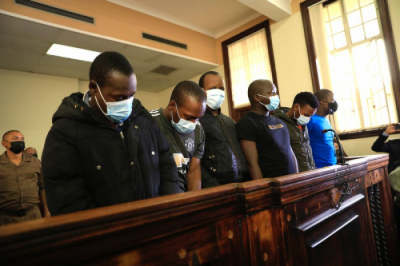 The case against six men accused of murdering whistleblower, Babita Deokaran has been postponed to 22 July 2022.

The men appeared in the Johannesburg Regional Court on Tuesday morning.

The case has been transferred to the High Court.

In the indictment, the State detailed how on its version Deokaran's last moments unfolded, saying that she had stopped on the side of the road outside her house to pick up her domestic helper when a white BMW, occupied by at least three of the accused, pulled up alongside her and fired off a volley of bullets before fleeing the scene. The other accused, meanwhile, had been lying in wait in the vicinity, the State said.

However, the State admitted in the indictment that at this point it still did not know precisely "when, where and in what manner" the murder was planned.

Deokaran was gunned down in an apparent hit outside her home in Mondeor, South Johannesburg, last August. She was returning after having dropped her teenage daughter at school and had stopped just metres from her front gate to pick up her domestic worker, when her car came under fire.

A high-ranking official in the financial division of the Gauteng Department of Health, Deokaran was also a witness in various graft probes – including the Special Investigating Unit's (SIU's) investigation into R300 million’s worth of dodgy personal protective equipment (PPE) tenders – and her death sent shockwaves across the nation.

She was one of four South Africans honoured at the 2021 international Blueprint Whistleblowing Awards.

More in this category: « Water and Sanitation opens five sluice gates at the Vaal Dam. Motorists given final extension until 5 May to renew their expired driving licence. »
back to top