SADC Troika approves the de-escalation of its mission in Mozambique. 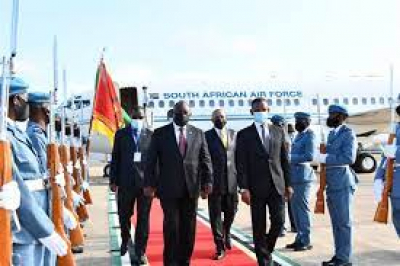 A Southern African Development Community (SADC) Extraordinary Organ Troika Summit says progress has been made in the SADC Mission in Mozambique (SAMIM).

The summit commended SAMIM leadership, including the men and women on the ground, for their sacrifices and commitment to the fight against terrorists acts in some parts of Cabo Delgado province.

The summit, which was officially opened and chaired by President Cyril Ramaphosa in his capacity as President of the Republic of South Africa and Chairperson of the SADC Organ on Politics, Defence and Security Cooperation, was held virtually on Tuesday.

The summit was attended by SADC Heads of State or their representatives from Angola, Botswana, Democratic Republic of Congo, Lesotho, Malawi, South Africa, United Republic of Tanzania and Zambia.

In attendance were members of the Troika of the Ministerial Committee of the Organ (MCO), Ministers from the SAMIM Personnel Contributing Countries, the SADC Executive Secretary and Head of the SADC Mission in Mozambique.

According to a communiqué released by SADC, the summit approved the transition of SAMIM from Scenario 6, (Rapid Deployment Capability) to Scenario 5 (Multidimensional Force), with a robust mandate.

"The summit commended SAMIM Personnel Contributing Countries for their continued support by pledging capabilities and personnel to enhance the effectiveness of SAMIM operations, and urged Member States to continue supporting the mission.

"The summit expressed its appreciation to the African Union (AU) and the International Cooperating Partners (ICPs) for the support towards the stabilisation of the security situation, as well as the socio-economic recovery and development of Cabo Delgado province," the statement read.

The summit has also expressed solidarity with the Republics of Botswana, South Africa, Kingdom of Lesotho and the United Republic of Tanzania for the demise of soldiers serving the mission, and expressed words of comfort for those wounded in action.

"The summit commended the Republics of Zimbabwe and Malawi for the spirit of solidarity expressed through delivery of the pledged donation of foodstuff in support of humanitarian assistance to the affected population of Cabo Delgado, "SADC said.

The Head of Mission was also directed by the summit to coordinate with the Republic of Mozambique on the implementation of the comprehensive Integrated Reconstruction and Development Plan of Cabo Delgado.

The summit has also acknowledged the expression of gratitude by the President of the Republic of Mozambique, Filipe Jacinto Nyusi, for SADC's continued support, collaboration and cooperation towards attainment of sustainable peace and security in the Cabo Delgado Province.

Ramaphosa was also commended for his leadership in steering the work of the Organ in pursuit of lasting peace, security and stability in the SADC region.

More in this category: « Cyril Ramaphosa to visit flood-stricken KZN as death toll rises. Mabuza, Malema, Steenhuisen and others declare properties, businesses & gifts. »
back to top