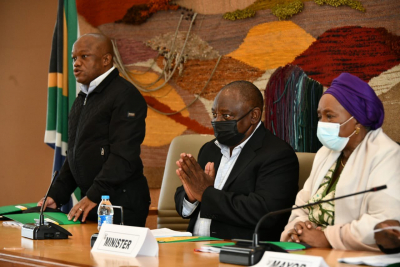 President Cyril Ramaphosa has arrived in KwaZulu-Natal to offer support to affected communities and assess the response of government and civil society to this critical situation.

The provincial government's spokesperson Lennox Mabaso said the first meeting point with the president would be at Pinetown Civic Centre by 10am.

"The president will first receive a briefing from the premier Sihle Zikalala which I anticipate to be a closed session and then there will be visits to affected areas," Mabaso said.

On Tuesday, the presidency announced that Ramaphosa is prepared for this visit, his thoughts were with families who had lost loved ones, people who have been injured and individuals, businesses and organisations who have lost property.

Meanwhile the Chairperson of the Select Committee on Cooperative Governance and Traditional Affairs, Water and Sanitation China Dodovu, has called on the National and Provincial government to move with speed to declare KwaZulu-Natal a disaster area.

The province has been battered by torrential rain and flooding in several areas across the province which has so far claimed at least 59 lives.

Businesses have also halted operations and several key road networks have been closed due to extensive flooding in the province.

Dodovu said declaring KZN a state of disaster area will ensure that the necessary funds are unlocked to assist flood-ravaged communities in KZN.

He also noted the loss of life, the destruction of property and livelihoods, and the general impact the storms have had on access to essential services such as water and sanitation.

We hope the local, provincial and national government will move with speed, in the spirit of cooperative governance as encapsulated in the Constitution, to initiate the process to unlock necessary funding to assist the people of KZN. We are also calling for the speedy repair of critical infrastructure to ensure that the people receive water and sanitation in the affected areas.”

Dodovu also said there is a need to urgently put in place mitigation strategies to avert the annual recurrence of such disasters.

"For example, there is a need for improved town planning and building processes to ensure that communities reside in areas that are relatively safe from mudslides."

The Chairperson also emphasised the need for businesses to contribute to the humanitarian efforts to assist the communities they operate in.

More in this category: « Mabuza, Malema, Steenhuisen and others declare properties, businesses & gifts. More gloomy weather predicted for parts of SA over Easter Weekend. »
back to top