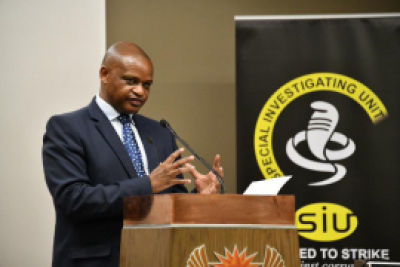 The Special Investigating Unit (SIU) has won an appeal to have more people added to the list of those who must be pursued in the Digital Vibes' saga.

The SIU seeks to have two contracts that the Department of Health awarded to the communications company reviewed and set aside.

The SIU had argued before the Special Tribunal that it should be allowed to recover costs from six companies which had allegedly received payments from Digital Vibes.

The Special Tribunal has ordered that five of the six companies be joined to the SIU's recovery bid.

This comes after parliament cleared Mkhize of contravening its code of ethics in relation to the controversial Digital Vibes' R150-million contract. Mkhize, who reportedly was a close associate of the owners of Digital Vibes, oversaw the health ministry when the tender was awarded to the company two years ago.

Mkhize is expected to hear from the special tribunal whether he has a case against the SIU on Wednesday.

He has accused the SIU of having an agenda when it made findings against him in its investigation of the R150-million contract awarded to Digital Vibes.

Mkhize claims that the SIU issued its referral letter to President Cyril Ramaphosa on the Digital Vibes contract on the same day it interrogated him.

In a new bid to clear his name, Mkhize has shifted the blame to the former director-general at the department of health, Precious Matsoso, in the awarding of the tender to his close associates.

In an application to the North Gauteng high court on 18 March, Mkhize said he was seeking the reviewing and setting aside of the findings and recommendations made by the SIU. He is also asking the court to declare the conduct of the SIU unlawful and unconstitutional.

The fresh bid by Mkhize comes as he is consolidating the province behind his bid for the ANC's top six.

It is unclear whether Mkhize will throw his name in the hat for president or deputy president of the country.

More in this category: « More gloomy weather predicted for parts of SA over Easter Weekend. Operation Dudula leader Nhlanhla 'Lux' hands himself over to police. »
back to top