Operation Dudula leader Nhlanhla 'Lux' hands himself over to police. 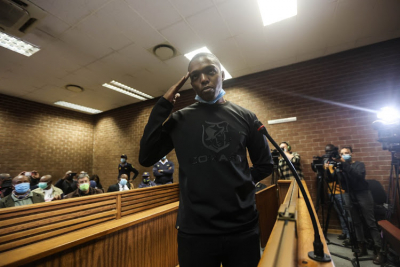 Operation Dudula leader Nhlanhla "Lux" Dlamini handed himself over to the police on Wednesday morning and appeared at the Meadowlands Magistrate's Court, where he was convicted for having failed to appear in court.

He appeared in court on 9 September 2019, and was released on a warning.

He was supposed to be in court on 30 September, but failed to appear and a warrant of arrest was issued.

However, the warrant of arrest was only executed this week.

The prosecution had asked for a sentence of three months in prison or a R300 fine, but the magistrate decided on the lesser sentence. It essentially means that he is cautioned not to recommit the crime and that the arrest warrant is discharged.

If he fails to appear in court on 3 May for the common assault charge, he will be forced to pay the fine or go to jail for three months.

Last month, Dlamini was granted bail of R1,500 by the Roodepoort Magistrate’s Court.

This followed his arrest on charges of malicious damage to property, theft and burglary.

The charges are in connection with an incident this month in which he and Operation Dudula members ransacked Soweto resident Victor Ramerafe’s home in search of drugs.

More in this category: « SIU wins bid to go after companies linked to Digital Vibes. Government reaffirms its commitment to help those affected by floods in KZN. »
back to top