Government reaffirms its commitment to help those affected by floods in KZN. 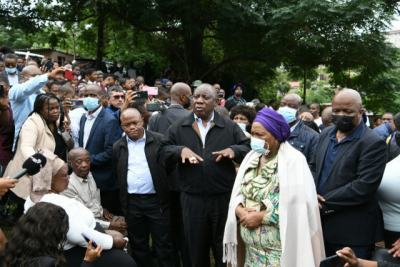 President Cyril Ramaphosa has told the people of KwaZulu-Natal that government will intervene to help families affected by the floods.

The coastal province has been lashed by heavy rain, which, according to provincial authorities, has claimed at least 59 lives and left a trail of destruction impacting infrastructure, homes and businesses.

The President is expected to visit at least five communities in eThekwini to assess the damage and to offer support.

Speaking in isiZulu to the residents of Clermont in eThekweni Municipality, where he visited a family that has lost four children after a wall fell on their home during the floods, the President said government will provide aid and relief to those who have been affected.

"I wanted to visit this area to see what has occurred… and I can see that [following the floods] this area is in a very bad state. A great tragedy has befallen you, one that we have not seen in a long time. The most painful effect of these floods is that many lives have been lost, people's homes have been destroyed, streets, bridges and churches have been destroyed.

Ramaphosa passed his condolences to the bereaved families and committed government’s support to them.

"You are not alone on this journey. We will walk with you. We will help you in all the ways that we can. We know that your hearts are broken because of what has happened but we are here to say that we are with you," he said.

President @CyrilRamaphosa accompanied by provincial leadership as led by KZN Premier @SZiks engaging community members affected by the #KZNFloods. Government is offering support to affected communities around the province. pic.twitter.com/g3mGlPZIQF

Meanwhile the KwaZulu-Natal Provincial Executive Council has called for a state of disaster to be declared in the province, following heavy downpours that wreaked havoc in different parts of KZN.

"Declaring a state of disaster will enable the province to apply for emergency funding from National Treasury and grant authority to reprioritise our current budgets in order to address the reconstruction work necessary to bring the province back to normal," said Premier Sihle Zikalala.

The province has been on high alert following heavy rains that started damaging eThekwini since the weekend of 9 April 2022.

The water level has been rising, including the river between Mega City in uMlazi and Lamontville.

The Provincial Executive Council, chaired by Zikalala held a special Executive Council meeting on Tuesday, where it received reports on the disaster incidents, including the effects of disaster response and interventions from the Provincial Inter-Ministerial Committee on Disaster Management, chaired by Cooperative Governance and Traditional Affairs (CoGTA) MEC, Sipho Hlomuka.

Zikalala noted that since Monday, the Province of KwaZulu-Natal experienced what is one of the "worst weather storms in the history of our country".

"The heavy rainfall that has descended on our land over the past few days, has wreaked untold havoc and unleashed massive damage to lives and infrastructure," Zikalala said.

Zikalala, together with MECs, Members of the Provincial Legislature (MPL), Mayors and councillors, visited different parts of the province to assess the damage caused, but also to pay respect to people who have lost their lives.

The Premier said that assessment to date indicated that many people lost their lives with eThekwini reporting 45, while iLembe District in areas including Ndwedwe and KwaDukuza reported more than 14 people who have tragically lost their lives.

He noted that the disaster has affected all races and sectors of society, including rural, townships, informal settlements, suburbs and luxury estates.

"Undoubtedly billions of rand worth of damage has been caused to homes, places of work, roads, bridges, electricity and water supply, and other critical government infrastructure. None of our districts has been spared, but eThekwini Metro has been the epicentre of this disaster with most of the rain and the worst damage.

He added that some communities adjacent to rivers are still being cautioned to relocate to a safer place, and many have been evacuated and are housed in community halls and other areas of safety.

"Some rivers in Amawoti and Quarry Heights are also overflowing, and residents are advised to move to alternative accommodation. Stapleton Road in Pinetown was also flooded and motorists were encouraged to avoid it.

"The Amanzimtoti area has also been flooded and the City's Roads and Storm water teams were in the area unblocking drains to minimise flooding," the Premier said.

The Provincial Cabinet also visited a number of families in the Georgedale and Sankotshe areas, where some families lost five members during the rains.

More in this category: « Operation Dudula leader Nhlanhla 'Lux' hands himself over to police. DBE push to introduce mother tongue instruction in schools. »
back to top