KZN schools shut for a week after devastating floods. 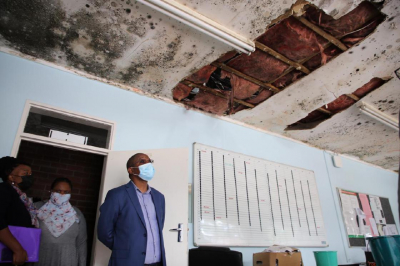 The KwaZulu-Natal (KZN) department of education has shut schools affected by the floods until next Tuesday, 19th of April 2022.

Since Sunday, the province has been battered by torrential rain and floods that left many families displaced and claimed 253 lives.

The department said it had decided to temporarily close schools because the deadly floods had negatively affected teaching and learning.

"In some areas, it is extremely dangerous to access schools as pupils and teachers are forced to cross high levels of water. We have, therefore, decided to provisionally close all affected schools until April 19 as we continue to monitor the situation across the province," the department explained on Wednesday.

The Provincial Executive Council held a special council meeting on Tuesday, where it received reports on disaster incidents. The report stated that over 140 schools were affected by flooding.

KwaZulu-Natal Premier, Sihle Zikalala, who chaired the meeting, said the weather has affected the delivery of education, as several learners had to remain at home, as schools had to close because they were damaged or access was severely inhibited.

"In particular, 40 learners and 12 educators from Tholulwazi High in Molweni were trapped at school because the bridge they use to cross the river collapsed and the road was washed away by floods. The Grade 12 learners and educators teaching Grade 12 had remained behind for extra tuition on this day," the Premier said.

In light of this, he said a special meeting was held by the MECs of Cooperative Governance and Traditional Affairs (CoGTA), Sipho Hlomuka; Education Kwazi Mshengu and Health Nomagugu Simelane, to discuss how the affected teachers and learners would be rescued.

It was resolved that a helicopter will be procured jointly by CoGTA, the Health, and Transport and Community Liaison Departments.

Zikalala said the province has, in the meantime, activated the seasonal contingency plans of sectors, the province, and municipalities to coordinate multi-sectoral response efforts.

"Coordination of efforts by all relevant stakeholders is underway, focusing on damage assessment, relief and response measures to address the immediate needs from existing arrangements and programmes within affected organs of State across the spheres, "Zikalala said.

More in this category: « DBE push to introduce mother tongue instruction in schools. Death toll reaches 259 in one of SA's deadliest floods on record. »
back to top