Death toll reaches 259 in one of SA's deadliest floods on record. 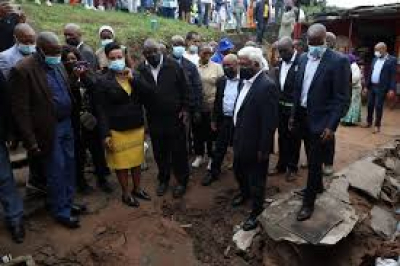 Kwazulu-Natal Cogta MEC Sipho Hlomuka says the death toll as a result of the floods stands at 259 across the province.

Hlomuka said there was a massive jump in fatalities, and that mop-up operations were ongoing as President Cyril Ramaphosa led a delegation visiting affected areas in the eThekwini Metro.

The loss of human life as a result of the inclement weather conditions is one of the darkest moments in the history of our province. Hundreds of people have been left homeless with many roads, public infrastructure and homes severely damaged.

"The death toll has significantly increased and stands at 259 across the province," Hlomuka said.

"We join the families in mourning the lives that we have lost as a result of the heavy rains," he said.

Ramaphosa said the death and devastation after torrential rains that caused roads and bridges to collapse, swept away homes and caused fatal mudslides is a "catastrophe".

Speaking at Bhekisisa High School in Ntuzuma on Wednesday, Ramaphosa said he had spoken to the finance minister to arrange financial aid for the province.

"This is a catastrophe of enormous proportions and we need to act with haste to assist affected communities. We are working to gazette declaring KZN a provincial state of disaster so we can do things quickly," he said.

He said the various ministers who are champions of the district development model will be working to address the impact of changing global weather patterns.

Hlomuka said the visit gave many of the affected communities hope as they deal with the trauma of losing loved ones and their homes in the incidents that occurred as a result of the heavy rains that struck large parts of Durban.

He added that mop-up operations had commenced and the provincial government continued to work with the national government to ensure that relief was provided to all those that have been affected by the storms.

"We wish to commend disaster management teams for the tireless work they have been doing to evacuate affected communities. Relief is being provided to residents housed in community halls across the province through collaboration with social partners and government departments.

"The inclement weather conditions are expected to continue over the Easter Weekend, with the ground already saturated, any rain that takes place could cause more flooding and mudslides. Residents are urged to seek alternative accommodation or use community halls," he said.

The rains in KwaZulu-Natal also flooded a dam beyond capacity, making it impossible to operate a hydroelectric generator at power utility Eskom, Chief Executive Officer Andre de Ruyter said in an online briefing.

South Africa's biggest logistics and freight operator Transnet, which runs the Durban port, suspended operations across its terminals there as the deluge damaged a road and hindered access to the terminals, it said in a statement.

The South African Weather Service declined to attribute the current spate of rainfall to climate change but said such heavy rain events could become more common.

Heavy rainfall in KwaZulu-Natal will considerably weaken by Wednesday, the weather department said, but added that rains will return from Friday to Monday.

More in this category: « KZN schools shut for a week after devastating floods. Gauteng sees an increase of over 1.7 million in population. »
back to top