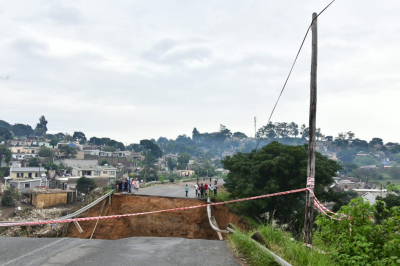 The Department of Public Enterprises (DPE) is working with Transnet and stakeholders, including the KwaZulu-Natal provincial government, eThekwini municipality and Eskom, to stabilise operations at the Port of Durban.

It comes amid deadly floods in the province which have claimed more than 300 lives and hobbled the nation’s busiest port.

Despite this promise, some areas in the KZN region are without power due to damaged Eskom infrastructure, which the power utility is attending to.

"By and large, our grid is still intact. We have some minor interruptions in isolated areas where there are some short-term interruptions. We have offered some assistance to municipalities in KZN to help with spares and maintenance crews.

"We have made an arrangement with eThekwini Municipality and we are not implementing load shedding at this point in time. We are ready and prepared to offer any assistance that we can to help KZN through this very challenging period, "he said.

De Ruyter said the power utility is working "as hard as [it] can" to return units to service and to attend to broken down generation units, which have led to the implementation of stage two load shedding.

"We had to take a decision to extend load shedding… at least until Friday, depending on how the situation changes with units either returning to service from unplanned trips or potential further breakdowns and of course, that risk remains, "he said.

The DPE said that Eskom is assisting the municipality to repair damaged infrastructure, and electricity was restored overnight to the Island View precinct. Safety checks are being conducted before operations by customers can resume, as some customers’ facilities were damaged by the flooding.

Transnet has gradually resumed operations at the Port of Durban as at 06h00 on Thursday (14 April), with ongoing risk assessments being undertaken to ensure the safety of employees and infrastructure.

Priority interventions, in collaboration with the eThekwini Municipality and Transport Authority, include repairing Bayhead Road – which is the main access road to the container terminals at the port and Island View – and investigating alternative access roads into the port while Bayhead Road is being repaired, the ministry of Public Enterprises said.

"There was a wash away of a section of Bayhead Road at the outfall of the Umhlathuzana canal into the harbour. Cargo which will be prioritised for evacuation from the port today includes food, medical supplies, and petroleum products."

Shipping – which was suspended as a result of extensive debris caused by the adverse weather – is expected to resume once safety has been established for marine craft and vessel navigation, the department said.

"There has been no damage to the pipeline infrastructure, and Transnet Pipelines will continue to supply fuel that is already in the system into the inland market," the ministry said.

A.P. Moller-Maersk A/S, the world’s biggest container line, closed its Durban offices and asked employees to work from home for the rest of the week.

Mobile-phone operators MTN Group and Vodacom Group, paper company Sappi and other firms have been affected by the floods. Insurers Old Mutual and Santam said they are assessing the extent of the destruction, Bloomberg reported.

"The damages seem quite severe and we have received a significant volume of claims, "said Old Mutual Insure chief actuary Ronald Richman. "We expect a significant number of new claims will be reported in the coming days, and we have mobilized our teams to deal with the expected volumes to ensure continuity of customer service in these difficult times."

Many of Vodacom's mobile-phone towers remain inaccessible because the roads had been eroded and there was a risk of electrical shocks, meaning the extent of the damage couldn’t yet be assessed, company spokesman Byron Kennedy said in a text message.

Private hospital operator Netcare Ltd. said some of its facilities were no longer accessible, resulting in staff shortages and challenges in transferring patients and supplies, although all of them remained open.

Retailer Pepkor Holdings Ltd’s Isipingo distribution centre in Durban sustained significant damage and had been temporarily closed. The company said its losses were still being quantified and it was adequately insured.

The country's main freight group urged truck drivers to stay away from the harbour area, which it described as "a disaster" because of damage to access roads, container yards, vehicles depots and trucks.

Queues of trucks as long as 10 kilometres formed along the N3 highway that connects the port to the commercial hub of Johannesburg, the Road Freight Association said in a statement.

"Logistics operations will be impacted: there will be delivery disruptions for goods being imported," said Gavin Kelly, chief executive officer of the Road Freight Association.

Adding to the chaos, a dozen crocodiles also got swept away from a farm near Tongaat, north of Durban. Nine were recaptured, but three remain on the loose.

Durban handles 60% of the country's shipments and also transports goods and commodities to and from nations in the region as far north as the Democratic Republic of Congo.

The disaster unfolded less than a year after a week of rioting and looting in KwaZulu-Natal and Gauteng provinces cost the economy an estimated R50 billion in damages and left more than 300 people dead.

More rain is forecast for the KwaZulu-Natal province this weekend, with the risk of localized flooding and strong, damaging winds, according to the South African Weather Service.

A low-pressure weather system that caused the devastation in the province is expected to move away from the country, it said.

KwaZulu-Natal Premier Sihle Zikalala has welcomed the declaration of a state of disaster in the province after heavy flooding this week.

The declaration followed a visit by President Cyril Ramaphosa on Wednesday.

"The declaration of the state of disaster opens the way for an orderly and coordinated response to this crisis. The declaration requires organs of state to strengthen support to existing structures to implement contingency arrangements and ensure that measures are put in place to enable the province to effectively deal with the effects of the disaster," said Zikalala.

The KwaZulu-Natal Department of Cooperative Governance and Traditional Affairs confirmed on Wednesday evening 306 people died as a result of heavy rainfall and flooding across the province.

Cooperative Governance and Traditional Affairs MEC Sipho Hlomuka said members of the KZN provincial executive committee would continue with visits to affected areas to lead the rollout of relief to communities in need.

"Municipal services like electricity, water, and refuse removal have already resumed in some areas.

"Residents are urged to be patient as teams in many municipalities affected by the flooding are stretched to capacity," Hlomuka said.

More in this category: « Controversial Aarto law heads to the Constitutional Court. Eskom warns of the possibility of more load-shedding next week. »
back to top