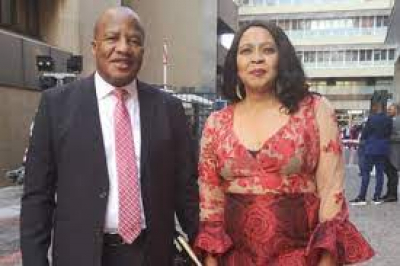 Minister in the Presidency Jackson Mthembu and his wife, Thembi, arrive at Sona 2020. File photo.

The family of late Minister in the Presidency Jackson Mthembu has confirmed that his widow, Thembi, has died.

She passed away in a Pretoria hospital on Thursday morning. She was 51.

A family member, Buyisile Mthembu, confirmed her passing but said further details cannot be divulged at the moment, as the family still have to meet.

Mthembu died in January last year of Covid19-related complications at the age of 62. He was laid to rest at his hometown of Emalahleni in Mpumalanga.

His late wife had worked as a nurse at a local clinic.

Mthembu served in ANC and Parliamentary structures. He had been part of the ANC National Executive Committee (NEC) since 2007 and was the National Spokesperson of the ANC under President Nelson Mandela from 1995 to 1997. He was appointed to the same role again from 2009 to 2014.

He served as Chief Whip of the party from 2016 to 2019 before he was appointed as the Minister in The Presidency under the Sixth Administration.

The ANC extended the party's condolences to the family.

"Mrs Mthembu served the public health service as a nurse in Mbombela, Mpumalanga as well as in Pretoria, a job that she greatly cherished. Her family had also confirmed that her affection to the nursing profession brought her much closer to the community," it said in a statement on Thursday.

The party said Thembi would have turned 52 at the end of the month.

"The ANC extends its deepest condolences to the late Jackson and Thembi Mthembu's children, family, friends and colleagues as they navigate through this difficult period. May they find solace in knowing that their loss is the nation's loss. May her soul rest in peace," it said.

More in this category: « Livestream: DOH briefs Portfolio Committee on health regulations amendments. Water and Sanitation in KZN says Shongweni Dam wall did not collapse. »
back to top