Water and Sanitation in KZN says Shongweni Dam wall did not collapse. 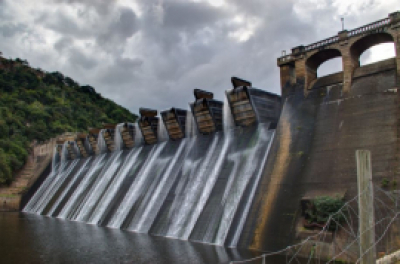 The Department of Water and Sanitation has reiterated that the Shongweni Dam, located west of Pinetown, in KwaZulu-Natal, has not collapsed.

This follows a video making the rounds on social media, alleging that Shongweni Dam has collapsed due to flooding in the province.

The department has denounced the report as untrue, and an "unnecessary ploy" by reckless social media users meant to cause panic amid a tragedy affecting KwaZulu-Natal residents.

Director in the Dam Safety Regulation Unit within the department, Wally Ramokopa, said the dam is equipped with 10 hydroplus fuse gates, which are designed to "tip" and fail in sequence to avoid catastrophic failure of the entire dam.

"Gate 1 on the far-left and Gate 2 on the far-right started tipping when the dam reached a specific level; this is part of the design and is therefore a safety measure. Had this not occurred, the dam was going to be subjected to more pressure, which would threaten the stability of the concrete wall and possible overtopping of the non-overspill crest.

"So, it is behaving as it should during flooding conditions as presently experienced in parts of KZN. A team of experienced dam safety office engineers is on high alert to monitor the situation at the dam, there is absolutely no need to be alarmed," Ramokopa said.

Ramokopa said the rest of the eight gates would fail should the water level rise higher than 2.4 metres above the full supply level at intervals of 0.1 metres until the last gate fuses, and this should happen in a specific sequence.

He, however, admitted that the dam's storage capacity would unfortunately be reduced if such an eventuality occurs until the fuse gates are restored.

The department reiterated its plea to residents to steer away from riverbanks and overflowing dams as persistent rains are still forecast in the province and some parts of the country during the Easter Weekend.