South Africans urged to observe this period of spiritual devotion with care. 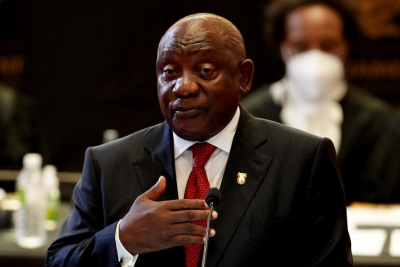 President Cyril Ramaphosa has wished all South Africans well for the Easter holiday period and urges all faith communities to reach out in prayer and material assistance to communities in KwaZulu-Natal who have been affected by devastating floods.

More than 300 people have lost their lives as a result of the heavy rains and flooding in the province.

Ramaphosa on Wednesday visited flood-stricken parts of KwaZulu-Natal to offer support to affected communities and assess the response of government and civil society.

In a statement on Friday, President has urged the nation to observe this period of spiritual devotion and social gathering with care, consideration, tolerance and also with safety.

Ramaphosa said: "This year we are blessed by the confluence of Easter, the Muslim fasting month of Ramadan and the Jewish Passover. It is a time in which millions of South Africans are exercising their faith and identity as part of our national diversity.

"For many, Easter is a time for worship, for family and for exploring our beautiful country. But for the less privileged and vulnerable, this can be a time when hardship and loneliness is laid bare.

"Our thoughts are with the people of KwaZulu-Natal who are affected by severe floods that have led to the loss of many lives and that have destroyed homes, businesses and public infrastructure.

"Government is providing assistance to affected communities and we will continue to monitor the situation."

Ramaphosa further called on South Africans to observe the public health regulations to protect themselves against COVID-19 and to ensure they are vaccinated.

Meanwhile some of South Africa's most influential religious leaders have accused President Cyril Ramaphosa of trying to ruin Easter celebrations for the Christian community and have vowed to disobey Covid-19 regulations.

The pastors who include pastor Mosa Sono of Grace Bible Church, and AT Boshoff of the Christian Revival Crusade (CRC) briefed the media in Joburg yesterday proclaiming their displeasure with the Ramaphosa administration.

The pastors said they would rather go to prison than turn people away from church for being unvaccinated. They said they had engaged the Deputy Minister of Health Sibongiseni Dhlomo, and MP, Tina Joemat-Patterson about the seriousness of the announced restrictions on the Christian community. But those meetings were unfruitful.

The pastors were also unhappy about the proposed amendment to the existing health regulations of 2017. The ministers accused the government of trying to apply some of the state of disaster provisions into the act.

This week marks Holy Week for the Christian community and the faithful are expected to gather in churches throughout the week until Easter Sunday or Resurrection Sunday.

More in this category: « Immigration Officer arrested in connection with R110K per person smuggling scam. Mbalula hopes to reduce road carnage during the festive break. »
back to top