Mbalula hopes to reduce road carnage during the festive break. 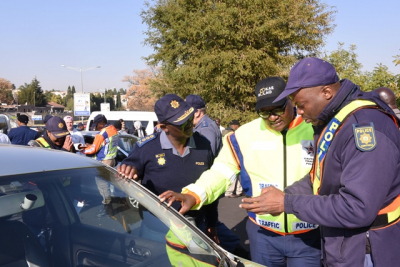 Law enforcement agencies are expected to be out in full force as thousands of travellers head to various destinations over the Easter long weekend.

In a Tweet, Transport Minister Fikile Mbalula said he would on Thursday join law enforcement on the roads as they oversee the anticipated traffic influx.

"Over the next few days, our national roads will, once again carry millions of motorists, one of the greatest movement of people over a single long weekend, as people will be travelling to different destinations for the Easter holidays, "he said.

Mbalula hopes to reduce road carnage during the festive break and made the remarks during an 'Arrive Alive' Easter campaign on Thursday.

He flew over the N3 and N1 to monitor traffic on some of the notorious spots as traffic picks up ahead of the long weekend.

While the numbers aren't as high as expected yet, traffic volumes are still expected to increase later in the day.

This despite inclement weather in parts of the country, including KZN where floods have left a trail of destruction.

"As much as the will increases but it's probably holidaymakers here and there but it's mostly people going home for easter holidays.

"The numbers are quite controllable."

The annual Moria City Pilgrimage of the Zion Christian Church (ZCC) draws the largest numbers of congregants during easter holidays.

But the church hasn't fully opened its doors following the Covid-19 pandemic.

"There's a huge difference especially after disaster management and also because the big churches like ZCC have not opened otherwise we would be seeing busses and all of that.

"This year the numbers in terms of traffic are very low," Mbalula adds.

In January and February this year, 1 823 people lost their lives on South African roads. This was higher compared to the 1 521 fatalities in the same period in 2021.

Over the last five years, KwaZulu-Natal, Gauteng and Limpopo accounted for the highest number of fatalities compared to other provinces.

All provinces experienced spikes in fatalities in the first two months of the year, with Gauteng leading with 355 deaths, followed by KZN with 269, Western Cape 249, Limpopo 239 and Eastern Cape 23, the Minister revealed.

More in this category: « South Africans urged to observe this period of spiritual devotion with care. KZN floods death toll rises to 341 with 40723 people affected. »
back to top