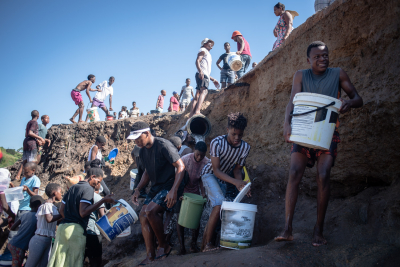 Residents collect clean water from a broken pipe sticking out from a collapsed embankment on the side of a road in Amaoti, north of Durban, on 14 April 2022. Picture: Jacques Nelles.

The South African Human Rights Commission (SAHRC) says it will monitor the provision of alternative housing, food, water, and healthcare in the aftermath of flooding in KwaZulu-Natal.

To ensure this happens the SAHRC said it is finalising a plan to monitor the distribution of the aid.

"The Commission will monitor, amongst many others, the provision of alternative housing, food, water, healthcare and other immediate concerns for affected victims of the floods, "the SAHRC said in a statement.

"In the provision of immediate relief, monitoring will be implemented to ensure that human rights are observed."

Although the SAHRC welcomed President Cyril Ramaphosa's commitment to provide aid to communities that have lost their family members and homes during the floods, it said the State must not let any of the relief measures go to the wrong people.

"The Commission calls on the State to ensure that every measure is taken to ensure that all resources dedicated to aid affected communities and people, actually reaches the intended parties and is not lost to corruption or maladministration, "it said.

The SAHRC also called for more attention to be given to the impact of climate change on human rights.

"Lessons ought to be learnt from this tragedy", it said.

It said everyone on South Africa needs to work together to "correct the compounding service delivery and infrastructure challenges in local municipalities throughout the country and particularly in the KZN province".

The SAHRC also had some tips for government to prevent these kinds of disasters in the future.

KwaZulu-Natal Premier Sihle Zikalala announced on Thursday night that 341 people had died and more than 40 000 people were directly affected. A state of disaster had been declared in the province.

More in this category: « Faith-based communities urged to avoid rivers during Easter weekend. Death toll from the Kwazulu/Natal floods rises to 395. »
back to top