Death toll from the Kwazulu/Natal floods rises to 395. 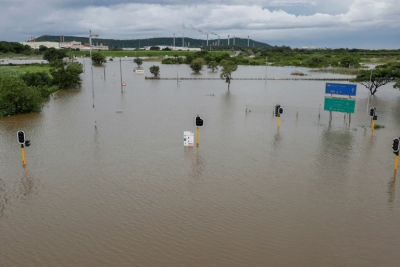 The death toll from days of flooding on South Africa's east coast rose to 395 on Friday, up from an earlier estimate of 341.

In a statement on Friday, MEC for Cooperative Governance and Traditional Affairs, Sipho Hlomuka said fatalities had increased and most of the deaths took place in Durban, where 355 people died.

"Sadly, the number of fatalities continues to increase with the latest figure standing at 395, with eThekwini at 355, Ugu at six, uMzinyathi at two, King Cetshwayo at four and Ilembe at 28."

This week's floods in Kwazulu-Natal Province have knocked out power lines, shut down water services, disrupted operations at one of Africa's busiest ports and strewn highways and beaches with debris, affecting more than 40,000 people.

SA Weather Service send a warning that damaging winds are forecast for areas along the coast from midday today into Saturday evening. Disruptive rain is forecast for eThekwini, KwaDukuza, Mkhambathini, Ndwedwe, Ray Nkonyeni, uMdoni and uMzumbe from today until Saturday night.

As the Indian Ocean warms owing to human emissions of heat-trapping gases, scientists believe it is battering Africa's southeastern coast with more violent storms and floods -- a trend likely to worsen dramatically in the next few decades.

Meanwhile relief funds are available for those affected by the heavy rains and floods in KwaZulu-Natal (KZN).

Finance Minister Enoch Godongwana said that an initial one billion rand for emergency relief was available for immediate use. Local authorities have estimated the damage at several billion rands.

"We are still at an emergency relief stage. There is a need for speed in this matter," Godongwana said. "The first phase is to get professionals to make an assessment of the damage and the cost. The second phase is going to be a recovery and repair."

"We make a budget every year for contingency like this… it sits in a couple of departments and that amount is available. It can flow even Monday [and] that emergency phase is about R1 billion," the minister added.

More in this category: « SAHRC to monitor government’s humanitarian aid in KZN. Zimbabwe bus crash leaves 35 dead ahead of Easter church event. »
back to top