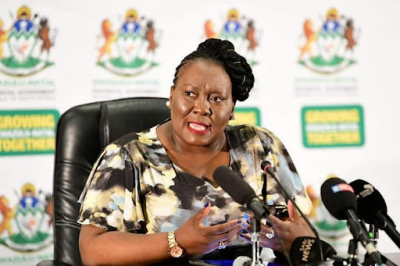 Health MEC Nomagugu Simelane says at least 58 healthcare facilities in KwaZulu-Natal have been ravaged by the floods that swept through the province this week.

These clinics and hospitals are in the eThekwini, iLembe, Ugu, uMgungundlovu and King Cetshwayo districts.

The facilities suffered damage to their roofs, floors and fencing, the KwaZulu-Natal health department said.

Simelane said the torrential rains that had battered parts of the province, leaving almost 398 people dead and thousands destitute, had resulted in an influx of patients.

This comes as hospitals and clinics in KZN are seeing increased numbers of emergency and trauma patients as a result of the floods.

The floods have also left several areas of KZN without water after the uMgeni Water infrastructure was damaged.

Simelane said plans are in place to ensure that emergency surgeries still take place, despite the lack of water.

"We are cognisant of the [importance] of water availability within a healthcare setting. That is why all emergency theatre cases are swiftly being discussed with neighbouring hospitals and diverted accordingly," she said.

The Health MEC also said clinics are being monitored for any signs of water-borne or diarrheal diseases that might occur due to the water shortage.

"This includes the inspection of potable water that is being transported by tankers, and in halls where displaced members of the community are being housed," she said.

Simelane also said many of the health facilities are struggling to provide normal services because of the damaged roads and power supply systems around the province.

"We are also aware that some health workers in areas such as iLembe District have had challenges travelling between work and home, and that some had to sleep in our facilities due to the damage on the roads, "she said.

She added that these health workers will be accommodated at the Inkosi Albert Luthuli Central Hospital, St Mary's Hospital in Mariannhill, and Mahatma Gandhi Memorial Hospital.

A thorough assessment of the damage is being conducted. The health department is said to be finalising internal administrative processes to source funding so that the repair work can commence without delay.

More in this category: « City Power hopes to restore power in Eldorado Park by Wednesday. Tributes pour in for late head of Mandela Bay Development Agency. »
back to top