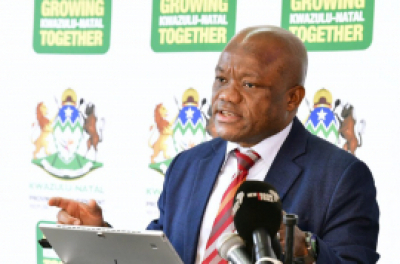 The death toll from floods that have battered South Africa's east coast has risen to 443, including a rescuer, a regional official said on Sunday, as dozens more are still missing.

"The death toll now stands at 443," Sihle Zikalala, the premier of the KwaZulu-Natal province told a media briefing, adding 63 other people are still unaccounted for.

A member of the rescue and recovery team "experienced difficult breathing and was airlifted to... hospital. Unfortunately he passed away".

Rains were starting to let up in the flood-ravaged east, allowing for search and relief aid operations to continue after one of the deadliest storms in living memory.

Zikalala said the "inclement weather has slowed our assessment and rescue operation on the ground, but we are once again back in the full swing".

Floodwaters engulfed parts of the southeastern coastal city of Durban and surrounding areas early last week ripping apart roads, destroying hospitals and sweeping away homes and those trapped inside.

According to the Premier, monitoring teams have been put in place in an effort to protect funds put in place to assist victims of the floods.

Additionally, the treasurer-general will be brought on board to perform the necessary audits, even before projects commence and funds are dispersed to ensure that no corruption takes place.

While he did not have the necessary data on hand during the briefing, the Premier estimated the current damage to provincial road networks at R5.6 billion.

Roads in the province were severely affected by the floods but by Sunday, Zikalala had said the province had managed to open the N2 and N3 national roads.

Over and above the billions of Rands donated to the province this far, an account at ABSA bank has been set up by the provincial government for those that might want to contribute to relief efforts.

Zikalala has also confirmed that ABSA itself has committed to donating R10 million to the government towards relief efforts.

These floods have forced President Cyril Ramaphosa to postpone a working visit to Saudi Arabia that was scheduled to begin Tuesday.

The loss of hundreds of lives "and thousands of homes, as well as the economic impact and the destruction of infrastructure, calls for all hands on deck," said Ramaphosa.

The country is still struggling to recover from the Covid pandemic and deadly riots last year that killed more than 350 people, mostly in the now flood-struck southeastern region.

More in this category: « Eskom implements stage 2 loadshedding until Wednesday. Shanghai records first Covid deaths since lockdown imposed on city. »
back to top