Sihle Zikalala allay fears around the possible looting of funds. 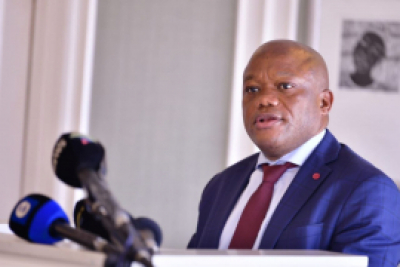 KwaZulu-Natal Premier Sihle Zikalala said the provincial government would be proactive in preventing any corruption as resources were made available to rebuild and recover.

The floods claimed 443 lives and destroyed thousands of homes and infrastructure.

During a media briefing on Sunday afternoon, Zikalala took the opportunity to allay fears around the possible looting of funds.

Zikalala has also defended the delivery of water by a tanker to his personal home.

In a video shared on social media, the water - meant for the public - is delivered to his homestead in the wake of the devastating floods in the province.

Zikalala contextualised that the water was delivered after  the local community had been assisted first.

"They gave water all over," he said, explaining that only after this did they deliver to his house, and after his wife had tried to access water elsewhere.

He adds: "What is not reported, is what the family, led by my wife, is doing in cooking  and providing food to the people staging at (the community) hall."

The floodwaters are the strongest to have struck KwaZulu-Natal in recent memory and were triggered by torrential rains that lashed the province last week.

The deluge engulfed the region, smashing in]to the port city of Durban and surrounding areas, pulling with it buildings and people. Most of the casualties were in Durban, and parts of the city have been without water for days.

Scores of hospitals and more than 500 schools in the region have also been destroyed.

In some of the worst-affected areas, some residents faced an agonising wait for the news of missing loved ones.

"We haven't lost hope. Although we are constantly worried as (the) days continue," said Sbongile Mjoka, a resident of Sunshine village in the eThekwini municipality whose eight-year-old nephew has been missing for days.

In a nearby semi-rural area, three members of the Sibiya family were killed when the walls of the room where they slept collapsed and four-year-old Bongeka Sibiya is still missing.

"Everything is a harsh reminder of what we lost, and not being able to find (Bongeka) is devastating because we can't grieve or heal. At this stage we are left feeling empty," Lethiwe Sibiya, 33,said.

Amid the destruction, climbing temperatures and an overcast sky, survivors sought divine solace and temporary distraction from their misery while observing Easter Sunday.

Thulisile Mkhabela went to church, at a large white concrete building with a tiled roof – one of a few solid structures left standing by the raging floods that engulfed her Inanda township.

She recalled watching her house gradually collapse under the weight of the waters six days ago.

It started with the living room. "We took out whatever we could," she said, and took the children to what was thought to be a secure outbuilding. As "soon as we took them out then the bedroom started collapsing", she said.

The family then moved to an outbuilding, which had also been damaged but held together for the rest of the night.

That building has since collapsed and they are now "squatting" in her brother's two-bedroom house where 12 people are crammed.

Worshippers at the United Congregational Church of Southern Africa raised hands as tears rolled down, while others fell to the ground during emotional prayers.

Rains were starting to let up on Sunday, allowing for search and relief aid operations to continue in and around Durban. The city of 3.5 million was overcast but the South African Weather Service said rainfall would have cleared by midweek.

The government, churches and charities were marshalling relief aid for the more than 40,000 people left homeless by the raging floodwaters.

The government has announced an immediate one billion rand in emergency relief funding.

More in this category: « Shanghai records first Covid deaths since lockdown imposed on city. Gauteng register 16 road fatalities over the Easter Weekend. »
back to top