Funeral industry warned over 'false sense of alarm' of 'backlog' in KZN mortuaries. 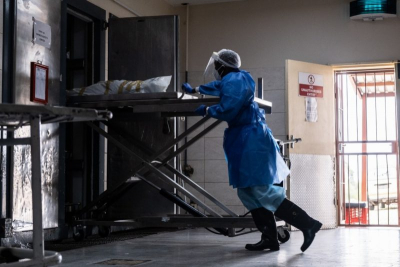 KwaZulu-Natal (KZN) Premier, Sihle Zikalala says government is in control of the situation at the mortuaries in the province.

Zikalala addressed the media on Sunday to give an update on the provincial government's response to the flood disaster.

During the briefing, Zikalala confirmed that more than 400 people have since lost their lives while just over 60 people were missing.

"The current inclement weather had slowed our assessment and rescue operations on the ground, but we are once again back into full swing.

Zikalala also said government is in control of the situation at the mortuaries.

This is after reports suggested that government mortuaries, two of which are located in Durban, had a backlog in conducting post-mortems.

The Phoenix and Pinetown mortuaries are the only two in Durban.

"With regard to mortuaries we are in control of the situation through the Department of Health. We have completed 243 post-mortems, and are left with 114 more to complete.

"We have mobilised additional resources, including seven doctors, to ensure that post-mortems are completed speedily, in order to avoid congestion, and to enable those who are grieving to bury their loved ones," he said.

The premier said that officials were constantly monitoring the situation and sending bodies to facilities that have space.

Zikalala urged the funeral industry to "stop creating a false sense of alarm".

"We are appealing to those who have lost their loved ones to be patient, and wish to assure them that we are doing the best we can under the circumstances.

"We would also like to appeal to funeral conductors to stop creating a false sense of alarm, and to allow our forensic pathologists to do their work unhindered – and to collect bodies that have been completed without delay," he said.

The National Funeral Practitioners Association of South Africa (Napufasa) had previously called on the KZN government to release bodies without conducting post-mortems.

"It will have a negative effect on us. The families would have already waited a week by the time bodies get to us. So, they would want to bury as quickly as they can.

"As we speak, the government mortuaries are not coping with the number of bodies that are piling up at the morgue.

"So, if there was a way that we could skip the post-mortems we would appreciate that bodies be viewed and declared that they can be released," Napufasa president Muzi Hlengwa said.

More in this category: « Russia hits hundreds of targets across Ukraine, fighters cling on in Mariupol. Over thousand people lose their homes in Langa shack fire. »
back to top