One killed, one wounded during clash between Operation Dudula members. 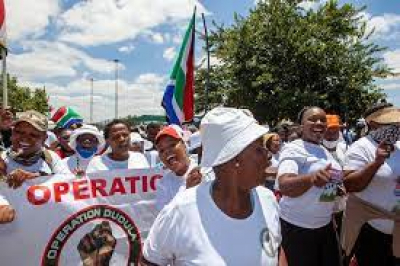 One person died and another was wounded during a clash on Monday between Operation Dudula members and residents of an informal settlement in Kliptown, Soweto.

"It is reported that at about 4.30pm residents of Pimville with Operation Dudula members, marched to Chicken Farm informal settlement in Kliptown complaining about theft of electricity cables," police spokesperson Brig Brenda Muridili said.

During the march an altercation between ensued between the marchers and an unknown group, leading to shots being fired.

Police confirmed that a man and woman were caught in the crossfire. The man succumbed to gunshot wounds, while the woman was shot in the leg. Both victims are South African nationals.

According to Operation Dudula leader, Nhlanhla 'Lux' Dlamini, the people who fired the gunshots are Zimbabweans and Lesotho nationals.

"We just got shot at with AK47s and R5s in Soweto! Zimbabweans and Sotho Nationals opened fire in a SA community crowd that was attending to cable theft. My guys got hit," the leader tweeted.

No arrests have been made.

There are reports of four more people who have been taken to the hospital with injuries, we are still tracing these injured people, Muridili added.