National state of disaster to be in place for at least three months. 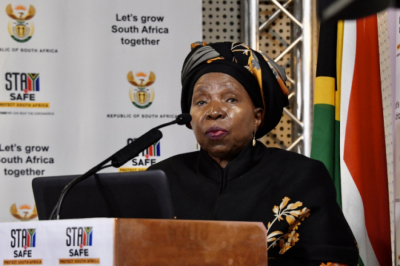 The Minister of Cooperative Governance and Traditional Affairs Dr Nkosazana Dlamini-Zuma has briefed the nation on the declaration of a National State of Disaster after floods in parts of KwaZulu-Natal and parts of the Eastern Cape.

The briefing follows the announcement of a national state of disaster by President Cyril Ramaphosa in a televised address last night.

Dlamini-Zuma said the province received more than 300mm of rainfall in 24 hours, resulting in more than 400 people being killed, 4 000 homes destroyed and 9 000 homes partially damaged. More than 40 000 people have been left destitute.

"The declaration of the national disaster is in line with section 27(1) of the Disaster Management Act, 57 of 2002," she said

"This will assist with the co-ordination and integration of our response efforts and rebuilding programmes.

We will be responding to this disaster through the District Development Model approach. This will ensure that the required action is taken within each district to address the immediate needs of those affected, as we continue to work to ensure that all affected persons are safe and that their basic needs are met.

"National ministers, premiers, MECs and mayors will also provide regular updates to the nation on interventions being undertaken in managing this disaster."

She said the the extent of the damage could only be estimated at this time and that proper data could be given only after engineers, quantity surveyors and various other teams had done their assessments.

While the national state of disaster can last up to three months, Dlamini Zuma said it could be terminated earlier or even extended should the need arise.

"This is a national disaster which cuts across almost every sector. The pandemic was a health issue."

Dlamini Zuma said more SANDF troops would be deployed to the province as a matter of urgency.

While thousands have been displaced, she said vouchers would be available for residents whose homes were partially damaged, so they could start rebuilding their homes rather than wait for the government to repair them.

Those whose homes were destroyed and who were moved to shelters and halls would be transferred to temporary homes that would be constructed as soon as possible.

Dlamini Zuma confirmed countries had pledged to assist the nation during this time. Japan, Qatar, United Arab Emirates and Algeria were among the countries that asked the government to state what was needed in order for them to assist.

More in this category: « Government looking at legalising medical use of cannabis. eThekwini ANCYL member Mfundo Mokoena gunned down. »
back to top