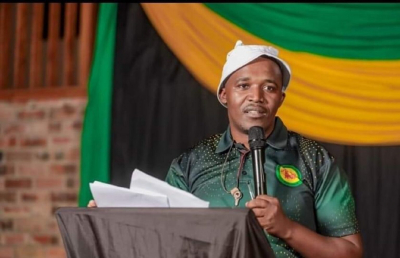 eThekwini ANCYL member Mfundo Mokoena was gunned down on Monday night outside his home. Picture: @1KZNtvNews/Twitter.

African National Congress (ANC) Youth League member Mfundo Mokoena was gunned down outside his home in eThekwini on Monday night.

Mokoena, who was also a branch deputy secretary in ward 67, south of Durban, was shot and killed on Monday night outside his home in eThekwini.

Mokoena was a well-known supporter of eThekwini council speaker, Thabani Nyawose, who contested the former mayor Zandile Gumede for the position of eThekwini chairperson earlier this month.

Gumede beat Nyawose for the position after receiving 210 votes while Nyawose got 181.

While the ANC has expressed shock and sadness at Mokoena's murder, the party insisted that his death was not related to political infighting.

The ANC eThekwini region said in a statement: "We call on the reporters not to make a speculative and divisive reporting that seeks to drive a wedge within the movement and society."

"Irresponsible reporting will shift the attention from real enemies towards sensationalism and derail the investigation."

Mokoena was also part of a task team deployed to rebuild structures of the ANCYL in KZN.

"We would like to send our deepest condolences to the family, friends and comrades from his branch and the movement in general for the loss of a dedicated and promising cadre.

The region called on those with information that may lead to the arrests to quickly report to the nearest police station "in order to end speculation".

More in this category: « National state of disaster to be in place for at least three months. University of Johannesburg to start offering its degrees on the blockchain. »
back to top