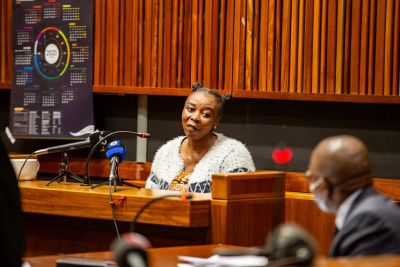 Convicted murderer and former police officer Rosemary Nomia Ndlovu was back in court on Wednesday on new charges.

Ndlovu was jailed last year after the court found she had a hand in the murder of five of her relatives and her lover, for all of whom she had taken out funeral or life insurance policies and She was handed six life terms.

She was nabbed after the hitmen she had hired to kill her sister Joyce and her five children tipped off police officers about the plot.

In the first case, it is alleged that she had paid a hitman a few hundred rands to murder the investigating officer and her former boss, as she blamed them for her arrest and subsequent murder convictions.

In the second case, it is alleged that she plotted to kill the husband of one of her police officer friends, Nomsa Mudau, who was stationed at Norkem Park police station. Mudau is her co-accused in this matter.

At the time, Ndlovu was still working as a police officer at the Tembisa police station.

In court on Wednesday, the former cop, who donned fresh eyelashes on her made-up face, seemed bewildered in the dock, asking when the offences were committed.

The case was subsequently postponed to 25 May, so she could apply for legal aid.

Speaking to the media outside court, National Prosecuting Authority (NPA) regional spokesperson Phindi Mjonondwane declined to comment on the merits of the case, only stating that the "details of the case will be revealed during the trial".

More in this category: « DOH deploys team to assess impact on healthcare services. Eskom 'eases' load shedding to Stage 3 from Wednesday at 22:00. »
back to top