Death toll in the KZN floods revised down to 435. 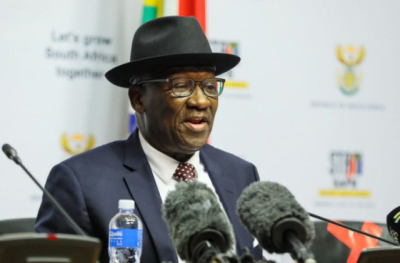 The government has revised down the total number of people killed in the devastating floods in KwaZulu-Natal to 435.

This after autopsies found that four people had died of gunshot wounds and nine others of natural causes.

Earlier in the week the number of flood-related fatalities stood at 448 after torrential rains in the province left a trail of destruction.

The damage to property and infrastructure is estimated to run into billions of rand's as the province continues with mop-up operations.

Families across the province were left destitute, while dozens remain unaccounted for.

A national state of disaster was declared as the Eastern Cape also comes to grip with flood events.

Cele denied accusations by some of a lacklustre response by government.

"Over 4800 personnel were deployed to the KZN province to assist in emergency relief efforts, including over 3000 SAPS members inclusive of Visible Policing, Public Order Police, Detectives, Crime Intelligence, Tactical Response Team and SAPS Search and Rescue teams. These teams have been supported by over 900 KZN metro police personnel.

"Visible Police and Public Order Police have been deployed to maintain law and order and prevent opportunistic crimes at identified areas in communities and business centres. These include Umlazi, KwaMashu, Pinetown and the Durban CBD and surroundings.

The SANDF is rendering assistance under Operation CHARIOT, which is a registered effort by the military to provide humanitarian and disaster relief assistance to all South Africans in times of need.

"As we speak, the SA Army is assisting the disaster management efforts and activities that include protection, support to mop-up work, extraction, technical assessments, transportation of humanitarian relief equipment and goods," said Cele.

The Minister said the SA Army will from today, as a matter of priority, work on restoring the vehicle/pedestrian bridge in Nteke.

"A water purification system will be set up along the Inanda Dam to expand the SANDF water provision reach. Eight water tankers will be on standby to supply water North of Durban to Tongaat."

Two platoons are currently part of the rescue and recovery mission, together with other State agencies involved in this disaster management initiative.

"The Military Police will be escorting convoys delivering humanitarian relief and essential services within the area of operation. The SA Air Force is providing air capabilities to assist with search and rescue and the transportation of humanitarian relief equipment and goods. The SA Navy divers are also part of the search, rescue and recovery effort," he said.

Above this, Cele said the South African Military Health Service was rendering operational health support in the disaster area of KZN, including provision of ambulances to the SANDF in various positions, as required by the Joint Operation Centre.

More in this category: « China keen to help build a Johannesburg to Durban high-speed train. SA and Botswana talks at strengthening bilateral relations underway. »
back to top