Senzo Meyiwa alleged killers plead not guilty to all charges. 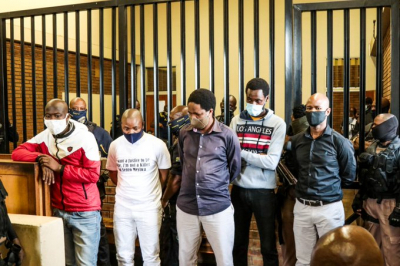 The five men charged with the murder of Bafana Bafana goalkeeper Senzo Meyiwa have pleaded not guilty on charges of murder, attempted murder, robbery and illegal possession of a firearm and ammunition.

Before the men pleaded to the charges, Mncube's lawyer told the court his client would die if he was not moved from Kgosi Mampuru prison in Pretoria.

Advocate Malesela Teffo told the court that if Mncube was not moved to another prison, he would be "six feet under" following an assault by a prison official. Teffo is representing four of the accused in the matter.

Teffo said his client had been tortured since being moved from Johannesburg Prison to Kgosi Mampuru prison.

The State previously told the court that correctional services had moved Mncube for security reasons.

"Accused two explained to me that accused three was assaulted by a correctional services officer. The incident started on the morning of the 12th. This particular officer was not wearing a name tag but if there is an identity parade, I could point him out, but I realised that he is not here today," said Teffo.

Teffo also said that he had been denied access to his client after arriving at court.

"I approached accused three to consult but I was told I cannot consult in court, and that if I want to consult, I must come to the prison. We tried to persuade him to show him that the conduct violated my client's constitutional rights," said Teffo.

This is not the first time that allegations of assault have been levelled against correctional services officials by accused in the case.

Teffo asked the judge to order that his client be moved back to Johannesburg Prison.

Prosecutor George Baloyi told the court that the matter had been brought to the attention of prison officials and that cases had been opened and were being investigated.

Judge Tshifhiwa Maumela said that although allegations of assault were very serious, he could not rule on the cases because they were being investigated and were not before him.

Meanwhile Kelly Khumalo's lawyer says the singer will appear at the Meyiwa murder trial if she's called as a witness.

Lawyer Magdalene Moonsamy is attending the trial on a watching brief.

"So if she is required to be present in court then she will be."

As the high-stakes murder trial of the five men resumed on Friday, the National Prosecuting Authority (NPA) announced that it is ready to proceed.

Meyiwa was killed on October 26, 2014, while visiting his girlfriend and mother of his child, singer Kelly Khumalo, in Vosloorus in Gauteng.

In the house that fateful day were Meyiwa, Kelly and her younger sister, Zandi, their mother Ntombi Khumalo, Longwe Twala, Meyiwa's friends Mthokozisi Thwala and Tumelo Madlala, and Kelly's then 4-year-old son, Christian, and Thingo, Kelly's daughter with Senzo.

More in this category: « City of Cape Town urges motorists to purchase plates at registered businesses. Nzimande pleased with progress on 4IR interventions in higher education sector. »
back to top