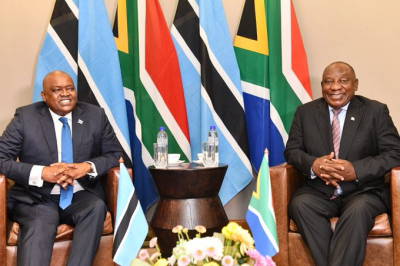 The Republic of South Africa and Botswana have concluded a successful 5th session of the Bi-National Commission (BNC) between the two countries, aimed at renewing and strengthening bilateral relations and multilateral cooperation.

At the invitation of President Cyril Ramaphosa, Botswana President, Dr Mokgweetsi Eric Masisi, paid a working visit to South Africa on Friday on the occasion of the 5th Session of the Bi-National Commission.

The Commission was co-chaired by both Heads of State, who were accompanied by delegations of ministers and senior government officials of both countries.

"The Heads of State held substantive and fruitful discussions on a wide range of issues of common interest across the bilateral, regional and international spectrum.

"During the official talks, the Heads of State noted with satisfaction the strong bonds of friendship and fruitful cooperation that exist between their two countries, and expressed their commitment to continue working closely in an effort to further strengthen and broaden their cooperation agenda," a joint communiqué from both countries said.

The Heads of State noted with appreciation the vast scope of the bilateral cooperation between the two countries, which includes trade and investment, energy, agriculture, tourism, youth and sport, infrastructure development, culture, mining, defence and security, immigration, environmental conservation and management, transport, as well as information and communication technologies.

They both noted that 40 agreements and Memoranda of Understanding (MoUs) have, over the years, been signed between the two countries, covering areas such as immigration, defence and security, energy, trade, transport, science and technology, and environment.

Ramaphosa and Masisi emphasised the need to fully implement all the signed agreements and MoUs.

"The Heads of State reviewed the work and progress of the bilateral cooperation since the 4th BNC between the two countries, which was held in November 2017. In this regard, they agreed on an implementation plan with strict adherence to set timeframes in the execution of BNC commitments and decisions," the statement read.

The Heads of State reiterated the importance of the ongoing economic cooperation between the two countries and emphasised the need to intensify collaboration on areas that hold promise for immediate impact and benefit.

They also expressed concern at the negative effects of the COVID-19 pandemic on the socio-economic development of the two countries, the region and the African continent as a whole.

They reaffirmed their commitment to continue working together to address the devastating impact of the pandemic.

On the Russia-Ukraine conflict, the Heads of State expressed satisfaction on the alignment of positions by the two countries at the United Nations on the ongoing conflict between Russia and Ukraine.

In his closing remarks, Ramaphosa said that he remains forever grateful for the strong ties that exist between the two countries and peoples.

"I am confident that by the time we meet in Botswana in 2023, our respective Ministers and senior officials will have made substantial progress in finalising the pending agreements brought to our attention, "he said.

In his closing remarks, Masisi said he is confident that the outcomes and decisions that they arrived at will inspire the countries to progress towards the ultimate goal of social-economic development and prosperity of the people.

"It is my firm belief that this session, particularly after a lull in convening the BNC meetings, has served to further strengthen the existing bonds of friendship, solidarity and fruitful cooperation between our two countries."

Masisi said he was pleased that new issues have been added to the agenda, including health research, next generation technologies, minerals beneficiation and nanomaterials, as well as media, information and publicity.