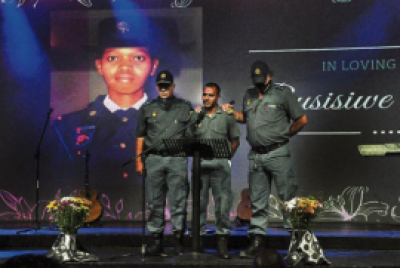 Late KwaZulu-Natal police search and rescue officer, Sergeant Busisiwe Mjwara, has been hailed for her courage and bravery through her unrelenting service to the nation.

Mjwara and her canine, Leah, on Sunday perished while searching for a family of three that did not survive the devastating floods in the Msunduzi River in Pietermaritzburg. It was a team of six that attempted to find the family when the tragedy struck.

This, he said, was because she chose to join the male-dominated search and rescue unit, despite the risks associated with the job.

"The girl sleeping here is very arrogant. She knows herself. It wasn’t enough for her to be a police officer. She said she wanted to do what others couldn't do. I’m told that in the entire unit, there were only two women among a host of men. She did what others avoided, "he said.

The Minister said Mjwara was the epitome of police "excellence".

The Minister paid tribute to all police officers who had risked their lives to provide service to flood-ravaged areas in the province.

Comforting the family, Cele said the Sergeant had concluded her life’s journey and called on the family to find solace in knowing this.

National Police Commissioner, General Fannie Masemola, described Mjwara as a "brave and courageous officer", saying her death was a sad turn of events for SAPS.

"There is no greater sacrifice than for one to give up their life in the service of others.

"Police... [provide] a service to communities... One of the critical services we provide is also search and rescue."

Mjwara, Masemola said, was among those providing the service.

"She chose to go and provide the service of searching for and rescuing people," he said.

When Mjwara joined SAPS in 2008, she "took up the oath of office, and promised to uphold and enforce the law".

Masemola said: "Most importantly, she promised to serve and protect the people of South Africa. As management of the SAPS, we have no doubt that she played a role in protecting the people of this country. She upheld the code of conduct, and also the ethics and integrity with pride and dignity."

"In the face of danger, she did not step back, but chose to put the safety and security of the people of this country first."

KZN Premier, Sihle Zikalala, said Mjwara's death was a reminder of the importance of police in society.

"They don’t just protect us from criminality but they even protect us in times of strife.

"To the family, do know that we grieve with you in this difficult moment of grief and find comfort in God.

"Let us accept that she left us in a painful manner. Let us imagine her conceding that she fought a good fight and has concluded her journey. She served the country with distinction. As we speak here, we speak of her patriotism, bravery and heroism. When all is said and done, Sgt Mjwara teaches us that courage and bravery are born out of a deep care for others.

"Without that human compassion and ubuntu, we cannot talk of courage and not speak of a crown of glory given to those who fought courageously," he said.

The Premier saluted the late sergeant, saying she died a "heroic death".

"Her work is risky by nature. She could have easily said the river’s current was too strong and not worth the risk, but she did not do that. That is courage, that is commitment," he said.

More in this category: « Masebe described as a true patriot and consummate communicator. King Misuzulu's coronation ceremony has been postponed due to KZN floods. »
back to top