ANC wants to revive a spirit of working together with the people |Ramaphosa. 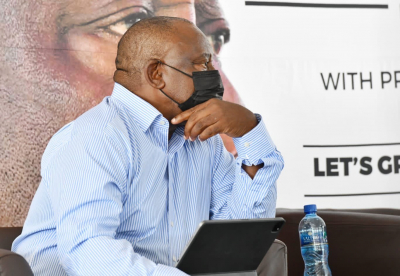 African National Congress (ANC) president Cyril Ramaphosa has made a call to Mangaung residents to work with their municipal leaders to deal with service delivery issues in the area.

Ramaphosa said the party will play an active role to ensure that all problems in the metro are dealt with.

He was speaking at the ANC Letsema Campaign Launch in Bloemfontein on Saturday, which is aimed at renewing the party's social contract with communities.

Ramaphosa said the ANC wants to revive a spirit of working together with the people.

"That is what Letsema is all about, we work together. So, we want to start a national campaign of working together to help the situation we are in right now."

Without referring to Magashule, Ramaphosa called for an end to corruption in the province.

Magashule, was suspended by the ANC last year after failing to step aside. He is facing a string of criminal charges in connection to the 2014 asbestos audit tender valued at R255 million.

Ramaphosa said the ANC plans to work with communities to rebuild the party and root out corruption.

"We will be here amongst you our people working and joining hands with the ANC. Let us work together to put our metro right, clean up our metro, streets, close pot holes to get rid of corruption."

"So, if you see anybody doing anything corrupt and stealing of public funds, come forth and speak up so we can stop corruption. I want corruption to come to an end, so that public funds can help the intended communities.

"All the thieves must just go…they must go because we are hot on their steps, they are going to jail.  So, let's work together to stop corruption."

Ramaphosa also made reference to the deadly KwaZulu-Natal floods.

"We are going to have a discussion in Parliament where we are going to tackle the disaster that has befallen our people in KwaZulu-Natal and in the Eastern Cape.

The ANC's 2002 Letsema campaign was criticised as an attempt to distract voters from the party's failure to deliver on its promises. Some communities might baulk at being told to empower themselves to address challenges when local infrastructure such as electricity and water provision is crumbling and unemployment is at a record high.

More in this category: « To achieve renewal of the ANC it requires unity, honesty and integrity |Motlanthe. eThekwini municipal worker gunned down at water tanker filling point. »
back to top