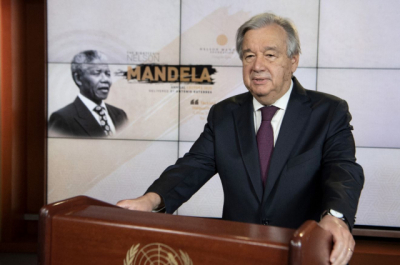 "It is simply wrong to go first to Russia and then to Ukraine, "Zelenskyy told reporters in the Ukraine capital. "There is no justice and no logic in this order," he added.

"The war is in Ukraine. There are no bodies in the streets of Moscow. It would be logical to go first to Ukraine, to see the people there, the consequences of the occupation, "he said.

In the Kyiv region alone, more than 1,000 civilians had been killed, he added.

More than five million people have fled the east European country, and thousands have been killed since Russia invaded on February 24. Also, there are growing concerns for some 100,000 civilians still living in the besieged city of Mariupol.

In both visits, Guterres aims to discuss "steps that can be taken right now" to stop the fighting and help people get to safety, UN Spokeswoman Eri Kaneko said at a briefing in New York.

"He hopes to talk about what can be done to bring peace to Ukraine urgently, "she said.

Guterres has called the Russian invasion "the saddest moment" in his five years in the UN’s top job. His appeal earlier this week for a four-day "humanitarian pause" ahead of Orthodox Easter fell on deaf ears.

Guterres had asked to meet the leaders of both nations in separate letters handed to their countries’ permanent missions to the United Nations in an attempt by the UN to regain the diplomatic initiative.

The UN Security Council has been hamstrung over the war because Russia is one of the five permanent members with a veto. In March, 141 countries in an emergency session of the General Assembly backed a resolution condemning the war and calling on Russia to " immediately ,completely and unconditionally" withdraw its forces from Ukraine.

The now-planned trip "is a visible symbol of what the United Nations is supposed to be standing for, which is peace and security," former UN Political Affairs Chief Jeffrey Feltman told the Associated Press news agency.

The organisation's top humanitarian official visited both capitals earlier this month to explore the possibility of a ceasefire, and concern is mounting over the fate of civilians in Mariupol.

Ukraine, meanwhile, has said it is hopeful that humanitarian corridors could be opened on Saturday to allow civilians to leave.

Guterres has had little contact with Zelenskyy since the war began, speaking with him just once by telephone on March 26.

Putin has not taken Guterres’s phone calls or had any contact with him since the UN chief said the invasion violated the UN charter.