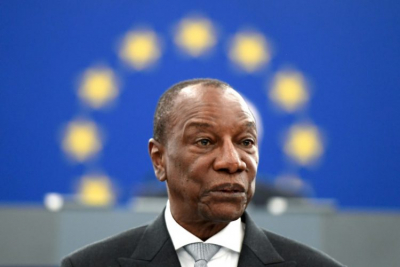 Guinea's deposed president Alpha Conde has been released from house arrest and can receive visitors, including family members, the ruling military government announced.

A statement by the military released late on Friday said that coup leader and interim president Colonel Mamady Doumbouya "informs national and international opinion that the former president of the republic is finally free".

"While continuing to benefit from adequate protection, he can receive on demand members of his biological and political family, friends and close ones," it said.

The former president will continue to live at his wife's family home in a suburb of the capital, Conakry, until renovations on his own home are completed, the statement added.

The 84-year-old was removed by army officers last year and replaced by Doumbouya. He was allowed to go to the United Arab Emirates for medical treatment in January, returning to Guinea on April 10.

Conde's party, Rally of the Guinean People (RPG), has said he was not truly free before or after his trip, and demanded his "total and unconditional freedom".

The RPG suspended its participation at a military-organised national reconciliation conference to further protest against his detention.

Conde became Guinea's first democratically elected president in 2010, with his triumph seen as putting an end to authoritarian rule by the country's two first presidents, who were in power for 50 years combined.

In 2020, Conde pushed through a new constitution that allowed him to run for a third term in October 2020.

The move sparked mass demonstrations in which dozens of protesters were killed. While Conde won the October election, his political opponents denounced the polls as a sham.

Conde's removal from power was widely condemned by Guinea's allies, and led to its suspension from the African Union and the Economic Community of West African States.

The 15-nation bloc sanctioned Guinea's coup leaders and has set an April 25 deadline for them to present a timeline for a return to constitutional rule.

More in this category: « Zelenskyy slams UN chief's plan to visit Moscow before Kyiv. 'I am still alive and getting stronger': Jessie Duarte on fighting cancer. »
back to top