'I am still alive and getting stronger': Jessie Duarte on fighting cancer. 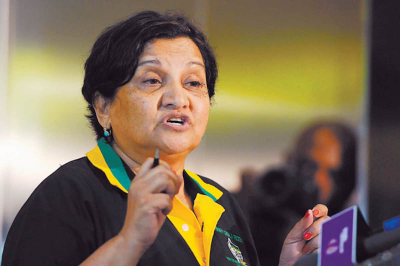 The African National Congress (ANC) has assured South Africans that its deputy secretary-general Jessie Duarte is alive and well, labeling reports that she has died as fake.

In a statement, the ANC has labelled the rumours as inhumane, barbaric, and inconsiderate.

"We call on those responsible for the dissemination of these malicious and insensitive rumours to immediately refrain from such acts as they are causing nothing but unnecessary panic within the movement and amongst DSG Duarte's family, friends, and comrades.

"Should the peddlers of the misleading rumours persist, the ANC will be left with no choice but to approach relevant authorities to investigate the origins and accordingly act upon those responsible."

On Sunday morning Duarte sent out a WhatsApp voice note confirming she is still alive.

"I am still alive and getting stronger by the day. Of course, it is uphill, it is cancer and it has its own challenges but I am fighting very hard to regain my health."

Treasurer Paul Mashatile has since been seconded to the secretary-general’s office following Duarte's illness.

Meanwhile, the governing party said it would convene an NEC meeting on Sunday to process policy discussion documents. Amongst the regional and provincial conferences this year, the ANC is also preparing for the national policy conference, which was postponed last year due to Covid-19.

The Eastern Cape is expected to hold its anticipated provincial conference from 6 until 8 May.

ANC provincial task team coordinator Lulama Ngcukayitobi said a working committee had resolved to reschedule the provincial conference pending the resolution of all outstanding disputes emanating from the branches.

The disputes are before the national dispute resolution committee at Luthuli House.