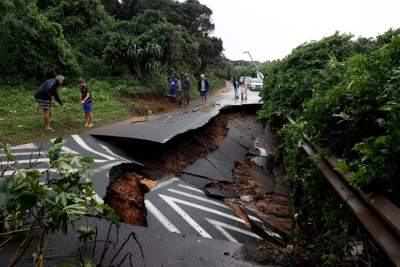 Zikalala was updating the media on the progress made in the province following the recent devastating floods which claimed the lives of more than 400 people.

Following a request a request from the province of Kwazulu-Natal (KZN) in the wake of the devastating floods in the province to have a national state of disaster declared, President Cyril Ramaphosa announced on 18 April that cabinet has decided to grant this request.

As of Sunday, 17 488 households have been affected by the disaster wherein 121 687 people were affected. To date, 485 people have lost their lives while 54 are still reported missing.

Zikalala said a total of 6 278 people are currently homeless and that 7 245 remain in shelters in eThekwini.

Most of the roads in KZN are open, but Zikalala warned that some roads are unsafe to use and have only one lane for traffic.

He said their objective is to ensure that all areas have water, electricity and road access restored as soon as possible so that normality is restored in all parts of the province.

Zikalala further took the opportunity to paint a picture of the estimated costs of the damage in the province, which may be revised upwards or downwards as operations continue.

"Overall, it is now estimated that the largest expenditure on rehabilitation will come from Prasa-related infrastructure, which will amount to R955 449 000.

"This is a clear demonstration of the ferocious nature of these storms and the work that remains ahead before we can restore our province back to the pre-floods period," he said.

More in this category: « Government commits to urgently deal with foot-and-mouth outbreak. France Election: Historic win but Macron has polarised France. »
back to top