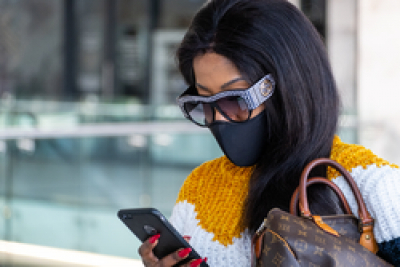 She has been in court since the start of Senzo Meyiwa's murder trial.

Khumalo hired Moonsamy to join the trial proceedings on a watching brief, which was allowed by Judge Tshifhiwa Maumela, on April 11, the first day of the trial.

The state argued that Moonsamy can only be present in court if her client is called as a witness.

However, Moonsamy rejected the notion and said the proceedings of the trial are public knowledge since it's broadcasted live by several media entities.

"You will excuse us, as to what you do when you are outside is not in our terrain." said Judge Maumela after asking Moonsamy to leave the court room.

"People who feature as witnesses or potential witnesses are requested to exit the courtroom. They are not supposed to sit in and listen to evidence if they will be called later, because we don’t want anybody to tailor their evidence after what they have heard.

"They should testify from what they know. Even if you are called as defence witness if you sit in you compromise the quality of the evidence you are going to give."

All pleaded not guilty to all of the charges levelled against them in court and trial continues.

More in this category: « Eskom anticipates between 37 to 101 days of load-shedding this winter. Emmanuel Macron wins France's presidential election. »
back to top