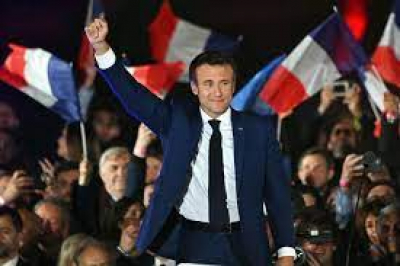 Macron took 58.5% of Sunday's vote, making him the first French leader to be reelected in 20 years. He and Le Pen advanced to the runoff after finishing in first and second place, respectively, among 12 candidates who ran in the first round on April 10.

While the contest was a rematch of the 2017 French presidential runoff, much of Europe watched the election with unease. A Le Pen presidency would have fundamentally changed France's relationship with the European Union and the West, at a time when the bloc and its allies rely on Paris to take a leading role in confronting some of the world's biggest challenges -- most notably, the war in Ukraine.

And though Macron's pitch to voters of a globalized, economically liberal France at the head of a muscular European Union won out over Le Pen's vision for a radical shift inward, the 41.5% of people who voted for her put the French far right closer to the presidency than ever before.

Le Pen's performance is the latest indication that the French public is turning to extremist politicians to voice their dissatisfaction with the status quo. In the first round, far-left and far-right candidates accounted for more than 57% of the ballots cast.

Many of those unsatisfied with the final two candidates stayed home. The voter abstention rate for the runoff was 28%, according to the French Interior Ministry, the highest in more than 50 years, according to French media. In fact, more voters abstained than voted for Le Pen.

Macron's supporters, gathered on Champs de Mars in the shadow of the Eiffel Tower in central Paris, broke out in massive cheers when the news was announced. The celebration was significantly lower-key than after Macron's victory in 2017, though he did once again walk to deliver his speech to the European anthem, commonly referred to as the "Ode to Joy."

In his victory speech, Macron vowed to be the "president for each and every one of you." He then thanked his supporters and acknowledged that many, like in 2017, voted for him simply to block the extreme right.

Macron said that his second term would not be a continuation of his first, committing to address all of France's current problems.

He also addressed those who supported Le Pen directly, saying that he, as president, must find an answer to "the anger and disagreements" that led them to vote for the far right.

"It will be my responsibility and that of those who surround me," Macron said.

Le Pen delivered a concession speech within a half hour of the first projection, speaking to her backers gathered at a pavilion in western Paris' Bois de Boulogne.

"A great wind of freedom could have blown over our country, but the ballot box decided otherwise," Le Pen said.

Still, Le Pen acknowledged the fact that the far right had never performed so well in a presidential election. She called the result "historic" and a "shining victory" that put her political party, National Rally, "in an excellent position" for June's parliamentary elections.

"The game is not quite over," she said.

More in this category: « Kelly Khumalo's lawyer told to leave courtroom in Meyiwa murder trial. Nando’s ordered to reinstate an employee fired for eating slices of carrot. »
back to top