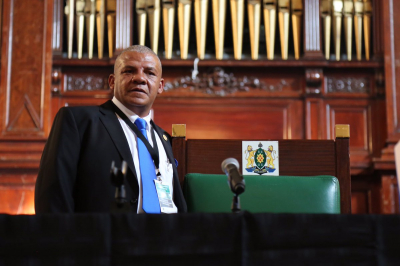 The motion of no confidence against the speaker in the City of Johannesburg, Vasco Da Gama, has been withdrawn.

Minority party Al Jama-ah, which had tabled the motion, announced that it was withdrawing out of respect for Da Gama who is in mourning due to a family bereavement.

The party is accusing him of allowing the Democratic Alliance's political stance to interfere with council business thus failing to safeguard its independence - among other listed reasons.

Da Gama had recused himself from council proceedings and handed over to the chair of chairs Colleen Makubela when Al Jama-ah's Thapelo Ahmed relayed their decision.

"The multi-party opposition comes to a consensus to allow the process bereavement for the speaker because we are Africans above all so we would love to withdraw and sympathise pretty soon we will re-table the motion".

This would not be the first time the speaker is challenged in his position in 2019 Da Gama was voted out through a motion of no confidence.

The motion was tabled just a day after the ANC received majority votes in council to have then late Geoff Makhubo installed as mayor.

Voting was conducted and the motion received 135 votes, 99 votes against it while the 30 EFF councillors abstained from the process. A total of 264 councillors were in chambers.

More in this category: « Ramaphosa talks tough against those waiting to steal KZN flood relief funds. Millions of South Africans may lose out on their R350 April grant payment. »
back to top