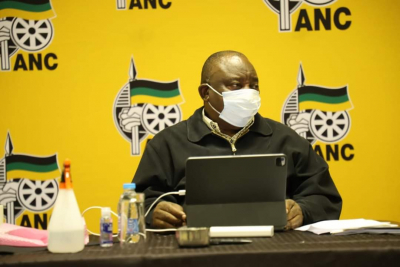 The ANC's national executive committee (NEC) has resolved that its guidelines governing the step-aside rule should be amended to explicitly state that leaders facing criminal charges cannot be allowed to be elected into office.

The NEC held a special meeting on Monday and Tuesday, which focused on the finalisation of discussion documents towards the ANC National Policy Conference and 55th national conference, to be held at the end of July and in December 2022 respectively.

However, NEC noted that the documents did not explicitly regulate whether members who have stepped aside voluntarily can stand for election to executive structures of the organisation at the provincial and branch level.

The NEC said it also noted that a number of members who have been indicted in a court of law, some on very serious charges, accepted nomination for such positions after stepping aside voluntarily, only to step aside again immediately after being elected.

The NEC noted with concern that this has resulted in confusion and serious reputational damage to the organisation," said the party in a statement.

"The NEC reiterated the ANC's position that, as a liberation movement and a governing party, our leaders must be above reproach, and that any misconduct or dishonesty is dealt with in a serious and consistent manner. The NEC reiterated the call made in Through the Eye of a Needle that: A leader should lead by example. S/he should be above reproach in his or her political and social conduct – as defined by our revolutionary morality. Through force of example, s/he should act as a role model to ANC members and non-members alike. Leading a life that reflects commitment to the strategic goals of the NDR includes not only being free of corrupt practices; it also means actively fighting against corruption."

As a result, the NEC agreed that any member who had stepped aside voluntarily following an indictment to appear in a court of law on any charge should not be allowed to stand for a position on a BEC, REC, PEC or NEC.

Any member who has been suspended in terms of Rule 25.70 following an indictment to appear in a court of law on any charge should also not be allowed to stand for a position on a BEC, REC, PEC or NEC.

The special NEC reiterated that the implementation of the step-aside rule constituted an important and ground-breaking element in the renewal and rebuilding of the organisation.

The NEC has also taken a decision to disband the national leadership structure of the women's league led by convicted Bathabile Dlamini.

Dlamini's executive has been in office since 2015 and its term of office has expired.

The league executive will be replaced with a national task team (NTT), according to treasurer general Paul Mashatile.

There was unanimity on the need to ensure the legitimacy of processes leading up to the national conference of the ANCWL. Accordingly, the NEC decided that the ANCWL [executive] should be disbanded ..."

The decision was taken after the NEC received a report from a task team led by former National Assembly speaker and current defence minister Thandi Modise which had been tasked with considering and making recommendations regarding the status of the Women’s League and its NEC.

More in this category: « Johannesburg's OR Tambo airport faces jet fuel crunch | SAPIA. Scopa chair Hlengwa to apologise to Mavuso after a heated confrontation. »
back to top